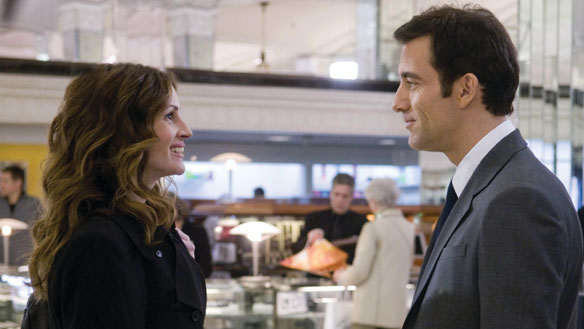 Ray Koval and Claire Steinwick are industrial spies.  But they’re spying for different companies.  But they knew each other before.  In fact, they spent a romantic weekend in Rome once.  Not that Claire will admit it.  Ray sees her walking through Grand Central Station in New York and follows her to a bar.  He says hello to her.  She says she doesn’t remember him.  But does she?  Is she playing him?  Is he playing her?  Are they both playing someone else?

That’s that question Tony Gilroy’s “Duplicity,” asks again and again and again.  A somewhat spry action comedy, Gilroy examines the art of deep cover; how deep can one get?  And, if you get too deep, do you eventually come out the other side?

Roy is working for a soap company.  Claire is working for a rival soap company.  Roy’s company knows that Claire’s company has a top-secret new product that it is about to unveil.  They send for Roy and his cohorts in espionage to figure out what it is and to beat them to market with a similar product.  Deception to reach their goals is fine.  Theft is okay too.  And then they’re off.  The story moves too quickly around in both time and in location to be able to give an easy summary of what happens.

Roy and Claire are played by Clive Owen and Julia Roberts, respectively.  Both are having a good time with Gilroy’s dialogue.  Tom Wilkinson and Paul Giamatti play the heads of the rival soap companies.  And they are having a really good time with Gilroy’s dialogue.  They both chew it all up and spit it out with a large amount of glee.  The cinematography is great.  The music is fun.  The editing is wonderful.  The writing is good, as is the direction.  So why does “Duplicity,” never completely add up to the movie it wants to be?

No matter how entertaining, (which it is,) no matter how quickly it moves, almost forbidding the audience from boredom, (which it does,) the plot seems almost too pleased with itself.  The heist/theft genre is not a deep pool, in as much as audiences aren’t supposed to get elaborate backstories.  They’re just supposed to get enough to follow along.  And “Duplicity,” seems designed to move too quickly for anyone to get a grip on anything.  The plot’s the thing in these types of movies and yet, Gilroy makes it too slippery for an audience really to get a hold on.  If it were a comedy, the audience could sit back, relax, and laugh, but it has pretensions of doing more.  So, what’s the point then?

It may sound like I didn’t enjoy the movie, that I wasn’t completely involved the entire time.  That’s not the case.  I was carefully watching everything on the screen, trying to follow along with what was happening.  However, after the movie, questions seemed to keep popping up.  Why did they do that?  What was that scene about?

It’s a movie worth seeing, but the great amount of work done in all areas of the production are perhaps best enjoyed in the comfort of your own home on DVD.  “Duplicity,” is that rare breed of Hollywood movie- it’s too smart for it’s own good.  -Sam