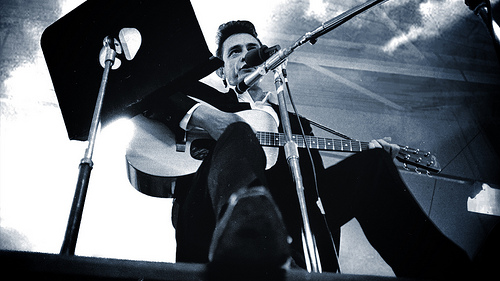 Director Bestor Cram has won awards for his previous films “You Don’t Know Dick,” and “Unfinished Symphony.”  His most recent movie, “Johnny Cash at Folsom Prison,” goes back to the recording of the music legend’s 1968 live album.  The movie screens at the IFFB, Friday, April 24th. In anticipation of the screening, Cram took the time to answer a few questions.

LR:  What was the genesis of this project?

BC:  While attending Cash Bash in Memphis celebrating the 50th anniversary of Cash’s Sun recordings, I me Mike Streissguth who shared his book Johnny Cash at Folsom Prison.  It immediately captured my imagination as an inspiration for the documentary because the narrative was about both Cash and some men who attended the concert and how their lives were transformed.

LR:  Johnny Cash is such a legend, as is the Folsom album.  Were you at all intimated by the subject matter?

BC:  Never intimated but increasingly impressed by the depth of Cash as a compassionate man and one who was deeply searching for greater meaning in life and its struggles.

LR:  What was the collaboration with writer Michael Streissguth like?

BC:  This became a mutual admiration experience where each of us added to the others discipline.  Restless creativity breeds exploration in areas of discomfort and that is a good thing.

LR:  What was the research process like?  Did Columbia Records have a good archive or were you searching all over?

BC:  We searched all over.  Uncovering materials about an Icon who everyone has covered is like trying to find a lost diamond ring–you know it is there, but it is hard to find unless you shine the light in the right place.

LR:  What was the most amazing thing (photo, film, or story) that you uncovered in the making of the film?

BC:  Well, the stills that rock photographer Jim Marshall made are incredible; he is a street photographer with the great knack of knowing where to be.

LR:  What was your favorite interview to do for the movie?
BC:  The one that makes you smile and say wow that just made me see the world a little differently.  Watch the movie and you will know when that happens.

LR:  What do you want audiences to take away from this film?
BC:  Prison.  Think about it.

BC:  Well, before both of these I made “Unfinished Symphony,” which is about war, democracy and dissent all set to an entire symphony. And before that, I made a film using 15 interpretations of a spiritual hymn. And I have made a film with original doo wop music.  Hard to know what is next, but it will have rhythm.

LR:  Your movie falls into the popular category of music documentaries.  What are some of your favorites?

BC:  “Woodstock.”  “Gimme Shelter.”  “Chuck Berry: Hail, Hail Rock n Roll.”  “The Last Waltz.”  The list goes on.  But my most favorite is the one in my head starring The Killer: Jerry Lee Lewis.  I wanted to do Last Man Standing.  He recorded an album and concert DVD with that name, but it is not the movie about The Killer I’ll have to do it someday.