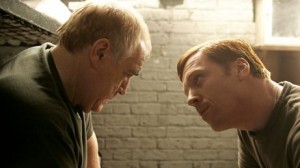 ‘The Escapist,’ is a film directed and co-written by Rupert Wyatt, and starring Brian Cox in a role specifically written for him. The film is about Frank Perry, a man serving a life sentence. Frank receives his first letter in 14 years thats inspired him to hatch a plan to escape from the prison. Frank begins to put together a crew of people who can help him see this through.

The film is told in non-linear fashion, jumping back and forth from the planning of the escape, to the actual escape itself. It immediately pulls you in right from the start. The look of the film is dark, the image grainy and gritty, its soundtrack echoey. There is a lot of silence in the film, I wasn’t keeping track but I felt like a decent amount of time had passed before I heard a full sentence.

The film also stars Damian Lewis, a talented actor who I know from the great ‘Band of Brothers’ series. In ‘The Escapist,’ he plays something of a leader among the inmates.

The only thing about the ‘Escapist’ that bothered me was I had trouble figuring out the relationship of some of the more minor characters, but all was forgotten by the end, as the third act rewards you greatly (and I won’t say why). Brian Cox was at the screening at IFFBoston, and talked about his performance in ‘Escapist’ as something he’d wanted to do for a very long time, a role in “non-acting,” something he alikened to Spencer Tracy, one of his heroes. Cox was brilliant in the film, with the performance not coming from his actions, but the emotions displayed on his face.

‘The Escapist,’ stands apart from the rest of the prison break genre, in its unconventional look and storytelling, but is certainly worth taking a closer look at. I have a feeling its one of those movies that will grow with multiple viewings.

One thought on “IFFBoston Review: The Escapist”