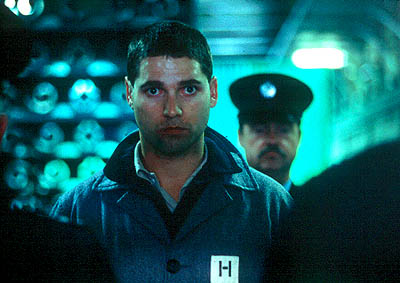 If you look up “bad-ass” in the dictionary, I have no doubt that there is a picture of Mark Brandon Read.  Andrew Dominik’s first movie, “Chopper,” is one of the most interesting, amusing, entertaining and fascinating movie I think I’ve ever seen.

“Chopper,” is based on Read’s autobiography about his life of crime, including murder, kidnapping, armed robbery and various firearms offenses.  It is a very simple and sparse movie, one where not a lot happens, but the character is so interesting that you can’t take your eyes off the screen for one minute.

Eric Bana plays Chopper, gaining weight to try and match the physical presence and being.  As soon as he walks into a room, you wonder when the violence will start.  In the opening sequence, Chopper and his gang, “The Overcoat Gang,” in prison.  In an open cell or pen all together, his close friend Jimmy Loughnan decides to try to and usurp Chopper and his grip and rule of the gang.  He stabs Chopper with a homemade shiv.  Nothing happens.  He stabs him again.  And again.  Chopper dares him to stab him again.  Still, very little reaction from Chopper.  Jimmy is now terrified.  Chopper slowly raises his shirt to show the many holes put in his chest by his best friend.  He is carried out of the cell by prison guards and given medical attention.  After recovering, and in an attempt to get out of the most notorious and dangerous division of the prison, Chopper has his ears cut off by another inmate.  This odd look instantly puts anyone who comes into contact with Chopper at ill ease for the rest of the movie.

We jump ahead in time.  Chopper is released.  And he tries to re-connect with some of his friends he met while incarcerated.  Some meetings go better than others.

As with his other movie, “The Assassination of Jesse James by the Coward Robert Ford,” writer and director Andrew Dominik is a master at letting the violence play out and explode on screen in an incredibly subdued and deliberate way.  He never shows you his cards, tipping you off as to what will happen.  Instead, he sits back and lets the tension build in the scene until the violence explodes and, try as you might, and as much as you were hoping for another conclusion, Dominik shows it to you in a way that says that this violent act is the only possible end to the scene.

And yet there’s humor.  It’s a funny movie.  Perhaps it’s because Chopper sees so much of life as a joke that you get caught up.  His personality is engrossing and enveloping.  You’re interested in him and what he has to say next.  The plot of the movie is so simple that it seems obvious that the character has to be strong, but Chopper goes above and beyond ‘interesting character.’

Eric Bana, (who I recently described to a friend, before seeing this movie, as ‘eternally destined to be the supporting actor, after some of his terrible lead turns,) shines as Chopper.  He also lays back and let the drama and the characters come to him.  You never get a sense of acting, he just is.  It’s truly something to watch and is incredibly memorable.

Chopper is a man who, despite being destined for violence, seems also to understand, enjoy and cultivate his celebrity.  He directs the camera crew shooting an interview, how to cut the piece, and where to focus the camera.  He knows he’s a legend and knows that with a little manipulation, the legend will grow.

“Chopper” is an interesting character, which will almost always make for an interesting movie.  It is most certainly that and more so.  I highly recommend it.  -Sam