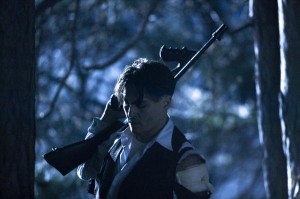 I have to admit, the idea of Michael Mann making a film about John Dillinger was something that excited me quite a bit. If anyone could do the story justice, it’d be the director of Heat. Though, what worried me was Mann’s current obsession of shooting everything on the Sony CineAlta HD camera. Would the fact that a feature film about John Dillinger was shot on video take me out of the period?

The film is an adaptation of a book by Bryan Burrough called ‘Public Enemies: America’s Greatest Crime Wave and the Birth of the FBI.’ The film opens with a spectacular prison break and shoot out, setting the mood for a dark and serious crime drama. John Dillinger (Johnny Depp) is on a crime spree in the Chicago area, robbing countless banks, and embarrassing an FBI that hasn’t gone completely national yet. J. Edgar Hoover (Billy Crudup), assigns Melvin Purvis (Christian Bale) to task of doing whatever it takes to stop Public Enemy #1, John Dillinger.

The theme here is Dillinger’s ability to charm, and hide amongst the public a la Robin Hood. He is a smooth fellow, and he lives a flashy lifestyle, hopping over bank desks, and romancing women. He fancies Billie Frechette (Marion Cotillard) and brings her into his life, showering her with gifts, and a lavish (yet on the run) lifestyle.

The film features some spectacular shootouts, and the period is captured beautifully through its art deco locales, and the actors clothes, guns, and cars. Depp plays Dillinger exactly as one would expect, he is charming, and despite his status as an arch-criminal, we are fascinated by him. Christian Bale on the other hand had the same problem I had with him in Terminator, he felt flat. A single emotion from beginning to end. I’m not sure what exactly is going on with Bale these days, but here’s hoping he turns things around, because I am definitely a fan of his past work.

As far as the cinematography goes, I have to say, when I first saw some of the trailers online, I was not impressed. For the most part, it holds up on the screen, there are only certain spots where it is very clearly shot on video, and it definitely is interrupting. But, given that everything else felt so real and believable, it is forgivable. I’m not sure why Mann is so cemented in sticking to HD video, if anything called for the use of film, it would have been this, but thankfully, it didn’t ruin the picture.

The film clocks in at just over two hours, and is definitely paced out slow, taking a lot of time building the character of John Dillinger. I definitely feel like of Mann’s last few films, this is definitely his best (in contrast to Miami Vice, which I did not enjoy at all). All-in-all it is certainly not the action flick that is being marketed, and certainly a strange choice for a July 4th weekend release. It’s an interesting and entertaining period film, and if for the production design and costumes alone, we’ll be seeing this film garner a few nods during awards season.