Skip to content
home Feature, Movies, Previews On Board the Train: An Early Look at Disney’s “A Christmas Carol” 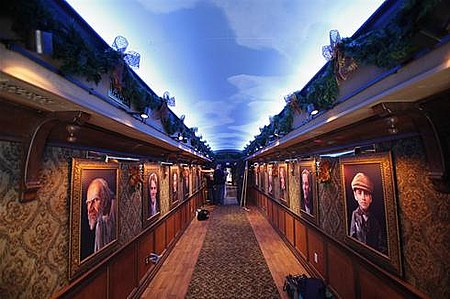 If you pass by South Station this weekend and notice there’s snow in the air, and you hear carolers singing holiday favorites don’t be too alarmed.  It’s just another attempt to excite audiences about a new Robert Zemeckis movie.

There’s a lot of ways to promote a movie these days.  Some deluge the internet, making it so that you can’t open a webpage without hearing all about the latest opus by someone.  Some movies advertise in magazines, others with sky writing.  If you’re the Walt Disney company and Robert Zemeckis, you get a train.

To promote this latest take on Charles Dickens’ classic, “A Christmas Carol,” Disney assembled five train cars and a screening room to give audiences a sneak peak at the latest 3D motion picture.

The train cars are divided into the various stages of computer animation.  The first car shows the inspiration.  You see the various Christmas stories that Dickens wrote over his career, including a first edition of “A Christmas Carol.”  They also have on display one of Dickens’ quill and ink that, may not mean much to most people, but to a book nerd like myself, is amazingly cool.

The second car shows the artist renditions of Victorian London.  Using HP, (a co-sponsor of the whole event… A fact that they never, ever let you forget,) screens, you get a vivid, full color and close-up look at all the artwork drawn for the movie.  The colors are lively, the angles are exciting and the detail is amazing.  On every car, a video screen plays a piece of the behind-the-scenes footage and interviews, so the actors, director, producer and CGI wizards all give you an idea of what you’re looking at.

The third car shows some of the models created.  Using lipstick cameras, Zemeckis was able to move around these miniature sets, to show animators just what he was thinking for certain shots.  Interesting to be sure, but you can’t spend a ton of time looking at a foam-core made Big Ben.

The fourth car shows how the action is captured.  It recreates the set that Zemeckis and the actors worked on.  It even has in it one of the motion capture suits everyone had to wear so that the computers could record their motions.  Meanwhile, on the video screens, Jim Carrey and Colin Firth talk about the embarrassment of wearing the suits, and the excitement of seeing how much of their performance came through onto the computer.

The fifth and final car allowed you to photograph your face so that you could see what a “Christmas Carol” character would look like with your features.  Obviously it didn’t work perfectly, but it was a pretty cool effect.

Then it was off the train and across the street into a giant, inflatable 3D theater with full Dolby sound.  We lined up outside, and saw the snow coming from the top of the portable theater, before we were led inside to see the clip.

The teaser involves some behind-the-scenes footage, but also shows two finished sequences from the movie.  Both scenes were incredibly detailed and inventively shot.  Zemeckis says in the behind-the-scenes that he wanted to take “A Christmas Carol” to a place that nobody’s ever imagined before and at the same time tell the story that everyone knows and loves.  How on accomplishes both remains to be seen.

If you have some free time this weekend, check out the exhibit.  It’s quick, fun and interesting.  It runs Friday night until 7pm, Saturday 9am-7pm and Sunday 9am-2pm.