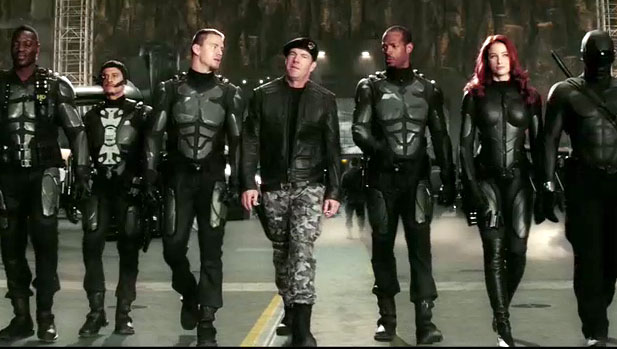 I shouldn’t be surprised that Stephen Sommers’ big screen adaptation of the G.I. Joe franchise was a big, loud, noisy mess.  I think part of it comes from my unabashed enjoyment of the first “Mummy” movie.  And I think it is that enjoyment that I take with me into every Sommers movie, trying to recapture that once again.  “The Mummy Returns?”  Nope, not there.  “Van Helsing?”  No, not there either.  And, sadly, “G.I. Joe,” might be the closest Sommers will get back to the joy of his first mummy adventure.

The story opens with two soldiers, Duke and Ripcord, heading a transport of a deadly nanotechnology-based weapon that will, in effect, disintegrate any substance it hits and will continue to eat through everything until the ‘bugs’ are deactivated.  The convoy is hit by an attack and, before the soldiers know who was doing the attacking, they’re rescued by an elite group of soldiers known as G.I. Joe.  (Why, I’m not really sure.  I’m not sure they explain.  And, if they did, Sommers ran past it so quickly that I missed it.)  (That happens a lot here.)  Duke and Ripcord are taken to an underground base where they meet all the members of the Joes: Scarlett, Snake Eyes, Breaker and Heavy Duty.  However, the fun of meeting new people is quickly ended when the group that attacked the convoy are back again.  This group is made up of Storm Shadow, the Baroness and Zartan.  They’re all commanded by The Doctor, who kinda looks like Darth Vader when he was waiting for his helmet to arrive in the mail.

This back and forth continues for quite a while.  One group has the missiles, the other group takes them back.  Then, the first group gets them for a while.  In their wake, part of the Egyptian desert is destroyed, along with most of Paris and the polar ice cap.

I wish I could say something about the characters and their development, but, since the writers didn’t spend much time on it, I won’t either.  The cast consists of Channing Tatum, Marlon Wayans, Rachel Nichols, Ray Park, Christopher Eccleston, Sienna Miller, Joseph Gordon-Levitt and Dennis Quaid.  There’s nothing terrible you can say about them because the script doesn’t really require acting.  It requires reacting and quipping.  If anything, they blend well into the cacophony of explosions and stirring, militaristic music.

Stephen Sommers is not a great director.  However, you have to give him credit that he shoots an action sequence like it was the closing monologue of “The Grapes of Wrath.”  Maybe it doesn’t always work, but you get a feeling like he tried.   I’m not expecting a movie about a toy which turned into a cartoon to be a great movie.  However, I’m simply asking it to hit its marks and entertain me for it’s running time.  And, try as it might, it just didn’t work for me.

And that’s really all you can say about “G.I. Joe: The Rise of Cobra.”  It tried, it’s too loud and, once you get used to the bombast, it’s still going, in fact, probably 20 minutes to long at least.  Of course, this made enough money to begin the conversation about a sequel.  I can’t believe I’m saying this, but, maybe next time things will strike the right balance.  -Sam