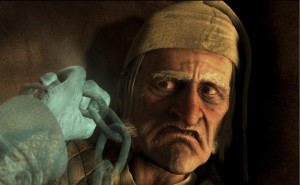 ‘A Christmas Carol’ is filmmaker Robert Zemeckis’ entry into a story that has been told countless times in a variety of different ways. Zemeckis tells his version via his favorite motion capture technique.

I’m not the biggest advocate for motion-capture movies. Often times the characters look so close to the actors playing them that I have to ask, what was the advantage other then costing a lot, to telling the story this way. However, for a story like this, the technique truly immersed you within the world of Charles Dickens’ classic story.

Ebenezer Scrooge is played by Jim Carrey, however, his voice is completely unrecognizable. Carrey’s voice acting is unbelievable. Everyone knows the famous tale of a cold-hearted, penny-pinching, selfish man who is haunted by three different spirits through out Christmas eve. One showing him the Christmas’ of past, one of the present, and one of the future. The hope is for this shallow, selfish man to see the error in his ways, and repent, in hopes to save himself, and those around him from a bleak, sad future.

The production design is unbelievable, Zemeckis and his animators created a living breating London, capturing the period eloquently. From the snow on cobblestone, to the breath coming from the CGI-actors mouths, the detail in this film is exquisite. There is a point where we see Scrooge’s sign age 7 years, the detail in the wood cracking and paint peeling was unbelievable.

The animation is leaps and bounds from ‘Polar Express,’ and what really made it work for me was the realism and movements in the human eyes.

The use of 3D was completely tasteful, the film lacked the ridiculousness of goofy things popping out at you. It was just another way Zemeckis set you into the world of Charles Dickens Christmas Carol.

See this film this Holiday season, and I urge you not to settle for anything less then 3D, the way Zemeckis intended the audience to experience this very special film.