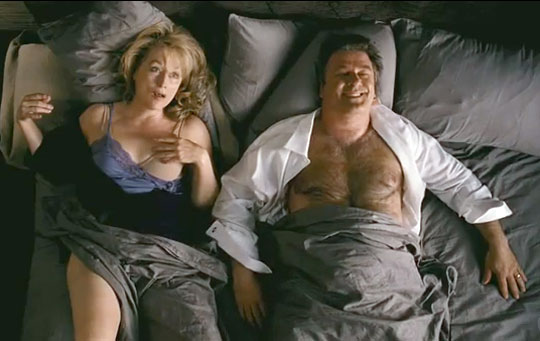 When considering the confusing world of relationships, “It’s Complicated,” is almost too simple a description.  Sadly, that is also the problem with Nancy Meyer’s latest movie.

Jane Adler is a successful baker and business owner, looking to expand her house as her youngest child is graduating from college.  Her ex-husband, Jake Adler, is also doing well, a successful lawyer, with a much younger wife, who Jake left Jane for 10 years prior.  At a party as the story opens, Jane and Jake have a civil conversation, something that a rarity in their recent relationship.  In New York for their son’s graduation, and with his current wife waylaid by a stomach virus, Jake and Jane bump into each other in the hotel bar and a friendly conversation turns into them spending the night together.  Jake is thrilled.  He only recently has come to the realization that Jane is the love of his life.  Jane, however is more reticent.  On top of the fact that she is an adulterer, (the ‘other woman,’ that she hated as her own marriage spilt up,) she is also developing feelings for her architect, who is helping realize her dream house.

Nancy Meyers specializes in these types of movies: older protagonists, adult problems and a sure hand behind the camera.  “It’s Complicated,” is no different.  Here, she is again presented with a dream cast.  Meryl Streep stars as Jane and Alec Baldwin is Jake, the ex-husband.  Adam, the architect is played by Steve Martin.  All three are perfectly cast, and there is an wonderful ease and playfulness with which they approach the material.  You can clearly sense they’re having fun.  However, Baldwin brings his ‘A’ game and is clearly relishing his character.  Baldwin’s Jake is a different take on his “30 Rock,” character of Jack Donaghy.  And Baldwin’s performance is something to savor.  He’s having such a good time, why shouldn’t the audience?

However, the end result is disappointing.  The script is too simplistic and basic to really hit home.  The characters are all too perfect and too pat and, while you like them, you don’t really feel for them.  Perhaps it’s that the three main actors are playing characters too close to their public personas- you see them and wonder, ‘why is this a problem, she’s Meryl Streep?’  And if you don’t feel a great deal of sympathy for the characters, you probably aren’t going to buy their problems.  The dream casting turns into a yoke around the movie that, for a good part of time, it is able to ignore, however, by the finish, it’s too much for the movie to take.

The contrivances that Meyers’ script asks you to believe are also ultimately too much to bear.  The movie plays out in a fantasy world.  Who can make a croissant like Jane does?  Who can have an office as cool looking as Adam does?  While Meyers chooses what would most likely be a realistic ending to a movie that is not, maybe the better, (and more honest,) title would be, “It’s Underwhelming.”  -Sam