History is written by the winners because, well, everyone likes a winner and because losers tend not to write of their defeat.  Movies are the same.  We like to look back at films and discuss/debate over which were the best of last 365, which ones captivated, inspired, touched us, etc. etc., but in the words of Neil McCauley: there is a flip side to that coin …

Now I am not going to make a list of some of the worst movies of ’09 (Only I am actually going to make a list, but there won’t be an order to it.  Maybe we can call it some random musings?  Could we do that?  Please?  Just this one time?  I love you?), but I do think that we need to take a moment and smell these movies that reek like reheated broccoli.  These swift kicks to the sack serve to help us appreciate those cinematic marvels that we hold, rightly, in such high regard.  And there were more than enough of these this past year to go around.

The Ugly Truth:  If given the choice to watch this movie or try to stop a charging rhino with my crotch, I would choose the rhino.  Gerard Butler took his ultra dude macho-ism from 300, went back about another 2,000 years in evolution, multiplied that times a billion and created the most stereotypical guy that never existed.  Hey, isn’t it funny when he says what guys think? No.  Dirty sex jokes are funny, right? Wrong.  Dirty sex is not funny.  Dirty sex is tender.  PS – Katherine Heigl, trying to get away from doing misogynistic and offensive movies by running directly into one is stupid.  Don’t be stupid.  PPS – I viewed this with the Lady, and she had to stop it halfway through.  And this is a girl that owns Love Wrecked.  Think about that. 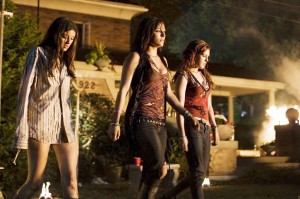 Sorority Row:  Poor Audrina Patridge, she has been blessed with the IQ of nutmeg, so how was she supposed to know this movie sucked when she first read the script?  Trick question, she can’t read.  “LOLZZZZ.”  This movie does answer one of the more fundamental questions about death that has faced humankind since the beginning:  What do you do with a dead body?  You stab it with a tire iron to kill it again.  We’ve seen too many undead walking the Earth, so it never hurts to double check.  Plus the movie ends if we don’t actually kill the sorority sister, rather it would just be a pretty good prank. 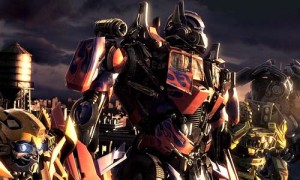 Transformers 2:  How loud can you make a movie?  Michael Bay says he can make it louder.  He says, “forget 11, this one goes up to a gruptepzillion.” (You think M. Bay sticks to our stupid number scale?  Pssh.  He makes up his own numbers them blows them up so you can’t use them.)  Megan Fox worked hard for her worst actress of the year award, but really?  Is that why she gets cast?  No, she gets cast because she has the thespianatic foresight to take a scene where she is asked to be a mechanic, and morphs it into her doing a centerfold spread on a bike.  I just watch her movies for the articles.

These are the movies we tend to, or maybe wish we could, forget.  Fantastic Mr. Fox was amazing.  Inglorious Basterds was great as Christoph Waltz stole the show.  The Hurt Locker, Up, Ponyo, Up in the Air, blah blah blah.  It’s like: how would we knows these were good if we didn’t have anything bad to compare them to?  So, while we look forward to this years big releases, let’s not forget all the movies that make the good movies look even better.  Even Paul Blart serves a purpose.