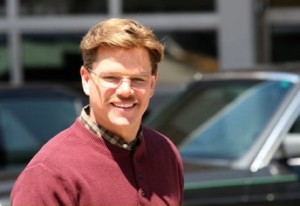 There is no way to get past how ridiculous Matt Damon looks in ‘The Informant.’ He’s gained weight, changed his hair, and fits the role of the awkward bi-polar whistleblower perfectly. I just wanted to get the obligatory “oh my god Matt Damon is so fat” out of the way. ‘The Informant!’ is a comedy directed by Steven Soderbergh based on the book by Kurt Eichenwald. A true story, ‘The Informant’ is the tale of Mark Whiticare (Matt Damon), a rising-exec at Archer Daniels Midland (ADM), a company that makes additives for food and beverages.

Whiticare tells his bosses he received a call from a contact at one of their competitors, that ADM had a mole within their ranks that was sabotaging their lysine production. Lysine being the division that Whiticare is in charge of, which had been losing money for months. Whiticare’s boss decides the best course of action would be to install a wire-tap in Whiticare’s phone, just in case his contact called him again.

Under the insistence of his wife, Whiticare reveals to the FBI agent that ADM was routinely meeting with price competitors to fix the price of lysine. That is when things really start to fall apart, as Whiticare bumbles along, recording hundreds of hours of tape and video in an effort to implicate his bosses in the price-fixing scheme.

The film is being marketed a lot goofier then it actually is, though there is an overall comical tone, the subject is a bit serious. Whiticare is a complicated character, who isn’t exactly what he seems either. Damon embodies the role so well, and you spend half the film shaking your head at ever foolish decision Whiticare makes.

The music in the film is delightful, jazzy, and fits the dark yet light hearted tone of the film. The best part of the film is how well Soderbergh and his production designer make this feel like a period piece. The entire film takes place from the early 90s to just a few years ago. It is so convincing, from the computer systems, to the cars, and haircuts, top notch work. Think of the movie as the Insider meets Erin Brockovich, just way funnier.