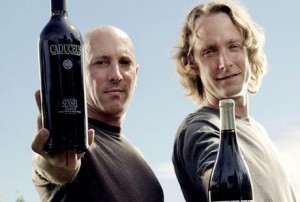 Wine culture can seem particularly daunting to the uninitiated. The sipping, the swirling, the swishing, the spitting, all practices of an art that, for those who are used to pressing their lips to a glass for the sole purpose of having a drink for the sake of a drink, has a such an apparent high barrier to entry that it just seems easier to mock the rituals than it is to learn them. How does one even begin to understand the culture? How do you learn what you are looking for in a particular year of wine? Why take the time to learn the art? With so many people already so advanced in an art with so many nuances, where do you even begin?

Blood Into Wine, a new documentary about the development of an Arizona vineyard, suggests starting in the soil. The film follows the growth and development of Merkin Vineyards as owner/proprietor Maynard James Keenan and his partner/mentor Eric Glomski break soil in the arid Arizona town of Jerome. Keenan, for those who don’t know, is the singer for the multi-platinum bands Tool, A Perfect Circle and Puscifer and one of the film’s focuses is to bridge the gap for Keenan’s fans and followers (and, as the film shows, they’re plentiful and rabid) from Keenan the “rock star” to Keenan the viticulturalist. Keenan demonstrates that growing wine in an area that most enthusiasts and professionals don’t even know produces the libation is a labor of love and his commitment to it rivals his commitment to any of those listed musical projects. Starting as an admitted novice, the film shows Keenan, surrounding himself with those who he can glean from, as he digs in the soil, prunes vines and plays a hands-on role in each step of the process for what he hopes will one day turn his efforts into a viable entity as well as (and quite possibly more importantly) shaping his understanding of what is basically modern-day alchemy. And this is the film’s main point: patience, hard work, and commitment to an idea, whatever it is, is its own reward. “It took the world seven years to get Tool, seven years to get A Perfect Circle, and it’ll take it seven years to get this,” muses Keenan. Art takes time, regardless of what you’re creating. Fans of Tool’s music will appreciate this statement, given that the band has been around for 20 years and has 4 LPs and 1 EP to show for it.

And what about that music? No doubt the ticket-buyers to this film consisted mostly of Keenan-enthusiasts probably eager to get a glimpse of the notoriously hidden artist. To go from sparingly giving interviews, rarely having his face shown undisguised, and living in where-the-hell-is-Jerome, Arizona instead of LA (one of Keenan’s favorite punching bags) to a full-length documentary starring the man himself is probably too strong of a boon for fans of the singer to pass up, even if the film is basically about a specific kind of gardening. Blood Into Wine does touch upon Keenan’s music career (considering it was the elephant in the room, it seemed inevitable that it had to show up in the film), giving clips from Puscifer performances, interviews with Revolver’s Editor-in-Chief, and even has Milla Jovovich discussing making music with him (an ominous prediction for fans is hinted at when Keenan noted that performances would probably become a nice 2-week break from the toils of the vineyard). But unfortunately, the musical aspect of Keenan was probably the film’s weakest point. While undoubtedly interesting from a fan perspective, the film’s focus on the growth and cultivation of Merkin Vineyards is the crux of the film and the rest felt out of sync with the topic at hand. Perhaps parallels could be drawn to what Keenan has successfully cultivated and created in the past to his new endeavor, but the film doesn’t lead the viewer towards that conclusion with any sort of confidence, so the pieces about his musical career feel tacked on and slightly jarring. Interesting, but in this case unnecessary. 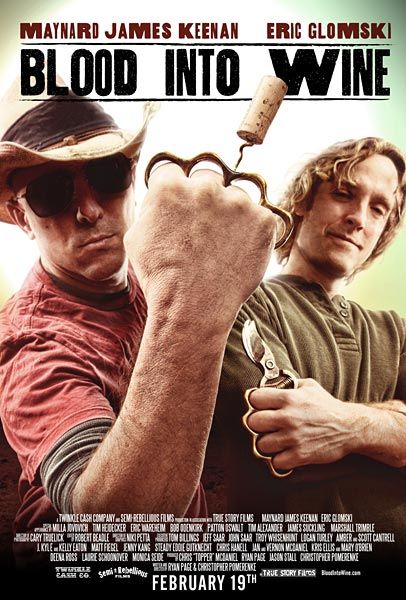 Indeed, this is a film about the wine and as a subject it is engrossing. Like Keenan before us, we meet Eric Glomski and are immediately impressed with his wealth of knowledge and his total sensory immersion into the craft of creating wines. To hear him discuss how 90% of what you’re tasting in a wine is actually the aroma, how he has trained his sense of smell to such a point where he can distinguish the various types of shampoos in the room, where he can smell a particular tree in a forest, is inspiring. To take something that most of us appreciate on a surface-level and approach it from a different angle is, there’s no other word that seems to fit better, neat. It’s all there already, right under our noses just waiting to be inhaled. Glomski and Keenan seem to make a perfect pair for taking on this craft; both approach the development of a wine holistically, understanding that what they are doing isn’t just a business, but an expression of themselves. “We aren’t chasing the market,” notes Glomski, and he’s right. Where the commercialization of the wine industry has been led by trends (one Napa Valley vineyard owner noted how some companies actually sell tried-and-true recipes for a successful insert-flavor-of-the-month-here to vineyards), the Arizona Stronghold (a joint venture between Keenan’s Merkin Vineyards and Glomski’s Page Spring Vineyards) revels in the creation of pleasing blends. To hear Glomski talk through tasting a wine, finding what he feels is its strengths and what it’s missing, and then thinking through what else he has tasted that could marry well and compensate is intoxicating. Glomski’s passion and incredible depth of knowledge combined with Keenan’s passion and willingness to work for it makes it hard for anyone with even a fleeting spark to create something not to their drive ignited to go work towards their goal. The film’s title suddenly becomes clear and obvious.

Will you learn a lot about the wine-making process? Blood Into Wine gives the audience a surface-level view, but don’t expect to walk away with any sort of Wine 101 knowledge. But that’s not the point. Blood Into Wine exists to show that whatever your passion or interest is, it’s going to take work to accomplish it. Anything worth doing is worth doing well and it’s going to take blood, sweat, and tears to try and get a competent command of your goal. But if you succeed, the first sip of that wine could be the most pleasing thing you’ve ever tasted, making all of your blood worth it.