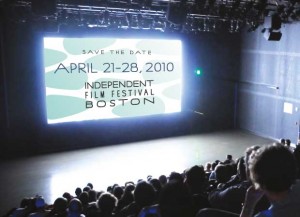 My favorite time of year is upon us, the Independent Film Festival of Boston 2010 is just around the corner. And the best just got better, the festival has expanded to eight days this year! The festival starts Wednesday April 21st, and ends Wednesday, April 28th.

Kevin Kline will be in attendance to receive the IFFBoston Career Achievement Award to recognize his impressive overall body of work as an actor.

Opening night as in years past takes place at the Somerville Theatre in Davis Square, Somerville MA. The festival will have 150 film screenings, filmmaker Q&A sessions, panel discussions, visiting filmmakers, parties and events will showcase the works of filmmakers who seek to create films that are life changing, thought provoking and expose aspects of life in new and revealing manners. Other venues this year in-addition to the Somerville theater are the Coolidge, Brattle, and the Institute of Contemporary Art.

The complete film festival lineup will be announced in late March. All-Access passes to the festival go on sale March 9th and individual tickets will be on sale April 1st, both on the festival website at http://www.iffboston.org.

Film passes and Chrome All-Access passes are now on sale at http://www.iffboston.org/buypasses.

I talk about IFFBoston quite often on this site, it is the most fun I have living in Boston period. If you love movies, and you live in the Boston area. Get yourself a pass, you won’t regret it. The programming is excellent, and the atmosphere, crowd, and people who work it, top notch. I can’t give it any higher endorsement.