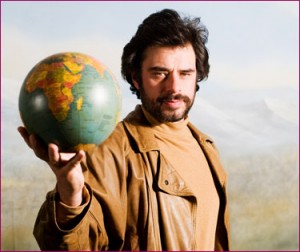 In all likelihood, people are going to watch Gentlemen Broncos for one of two reasons: 1.) because it’s from the team that created and directed Napoleon Dynamite, a film that has garnered enough “indie” and word-of-mouth street cred for the husband-wife team to pull in an audience for another film or two (I could be wrong, but I get the impression that their second outing, Nacho Libre, may have dipped into that goodwill well or, at the very least, didn’t make the water-level rise), or 2.) because it stars Jermaine Clement, probably best-known as Jermaine from the HBO series, Flight of the Conchords.  Gentlemen Broncos seems to be the type of movie that relies on an existing fan base to gain any traction in the theater or on DVD.  The film isn’t inaccessible if you you’re in the dark on either of the two above reasons, but it is absolutely tailored to a pre-existing audience: fans of the above or people who enjoy quirky, “indie” movies that try to show a different slice of Americana’s pie.  The film’s story is as follows: Benjamin Purvis is a shy, non-descript teenage writer with a rabid appreciation for sci-fi author Ronald Chevalier.  Benjamin attends a writing camp where he submits his story, Yeast Lords, into a contest to be judged by Chevalier and it turns out that Lords is actually good enough for Chevalier, who is close to losing his publishing contract because of a string of not-so-hot book ideas, to plagiarize. Benjamin must fight to take his story back from Chevalier as well as the local filmmakers who have turned Yeast Lords into one of their films, albeit heavily rewritten.  And then Benjamin wins!  Or something.  Gentlemen Broncos‘ story actually seemed to be there more out of necessity than anything, which kind of made the film’s story (ironically about writing) feel sort of loose and unimportant.

But that’s not to say Gentlemen Broncos is a complete misfire.  It does a few things quite well.  The look of the fantasy pieces in the film (dramatic enactments of both authors’ versions of Yeast Lords) are, for the most part, spot on.  Influenced by the countless sci-fi paperback covers that lined grocery store checkouts and novelty science-toy stores  back in the 80s (you know, the painting of a hero in a silver suit shooting a laser gun at some sort of green, six-eyed alien creature peering from behind a moon rock, photon blaster in hand, all on some distant landscape watched over by three moons), Broncos’ fantasy

sections look like those covers come to life: the blues are absurdly blue, the clouds are impeccably white, everything within each shot is completely lit.  Those scenes look like a print of Forbidden Planet that was punched up by a solid digital cleaning.  Another solid checkmark for the film goes to April Napier’s costume design.  Napier’s wardrobe design is a strong reminder at just how clothing can capably help set the tone for a story.  If the theater were to mute Gentlemen Broncos, looking at the costumes would give the audience a firm grasp of the characters, the general location of the film and the eccentricities that Hess was clearly trying to bring to the forefront.  And the main character, Benjamin Purvis, is sympathetic enough that you kind of want to root for him (or, at least, you certainly don’t hate him).  While the character couldn’t get more cookie-cutter insecure-protagonist-who-lost-his-father-at-a-young-age-and-finds-his-outlet-in-writing-while-surrounded-by-eccentrics-and-those-who-are-willing-to-take-advantage-of-his-insecurity-including-his-hero-turned-nemesis, actor Michael Angarano infuses enough reality in Purvis so that when scenes where half-assed love interest Tabatha (see comment about the story being “loose and unimportant”) has an obscene amount of hand lotion dumped onto the palm of her hand and she turns to Benjamin to request a hand massage, my initial reaction of “No fucking way” was tempered by Angarano’s character so that I eventually conceded, “Yeah, maybe the high school me would say ‘sure’.”

But while Purvis is appropriately likeable, the rest of the film is overly crowded with eccentrics.  Literally every character on the screen is weird, and not just in personality.  Hess populates Purvis’s life and town with outwardly strange people who, while they have just enough heart, they’re just not believable.  His mother is a fashion designer who makes horrible clothes but believes they’re great (they’re very, very clearly not: see the I Dream of Jeannie fall-wear for an example), Lonnie, the amateur filmmaker, has such an exaggerated mouth and way of speaking that just screams “trying too hard to be an oddball!”, Chevalier speaks in a weird pitch, has an odd hand gesture to say goodbye or thank you, and Dusty has long, badly permed hair, a mustache tailor-made for cruising a high school parking lot for chicks in a beat-up van with a mystical panther painted on its side, and a snake for no other reason than it’d be crazy for him to have a snake.  The list goes on.  And what’s interesting is each character is so over-the-top with their oddities that it becomes abundantly clear we’re supposed to be laughing at these small town weirdos.  Hess seems to have designed Gentlemen Broncos’ comedy around pulling the audience up to this heightened sense of self so we can all have a really good laugh at these people who are clearly beneath us.  And it just feels mean.

Which raises the question: How does a comedy work?  To make an audience laugh involves more than just throwing every nutty idea writers can think of onto the screen in the hopes receiving the coveted laughter payoff.  There’s a science, an art, to putting something on film that will register with an audience, eliciting chortles, guffaws, and uproarious laughter.  One way a good comedy pulls this off is by using the characters and/or the situations to point out things about ourselves.  Broncos seems to want to lance the idea of the small town and its inhabitants, but it doesn’t infuse enough of the small town that we all know to make what we’re watching remotely relatable.  I didn’t grow up in or ever visit a town where everyone in the general population looks or behaves like a circus retiree.  So how can we expect to laugh at our small town culture when everyone presented on the screen is so out there it’s almost absurd?  It’s too much to ask the main character to represent the audience and as a result, the audience relates to no one and misses the joke.  As contrast, look at a film like Waiting for Guffman, a Christopher Guest movie that perfectly reflects and deflates the idea of a small town and its inhabitants.  Guffman shows townsfolk who are perfectly believable and relatable, allowing the audience to see itself in the characters so that ultimately the film’s comedy comes from holding up a mirror and laughing at what we know to be true about ourselves.  Comedies can make fun of the little people if they’re willing to show that they understand and embrace the little people.  Guffman does this, Gentlemen Broncos does not.

And it’s not that a comedy needs to show a true reflection of the audience in order for it to work.  I’m hard-pressed to believe that any character Will Ferrell has ever played could be found hanging out at your town diner.  But the comedy in a film like Blades of Glory or Talladega Nights resides in the exaggeration of these overly, and unjustifiably, cocky characters Ferrell portrays.  They are so broad that they exist as almost the embodiment of a personality trait, a caricature.  They have a cockiness that 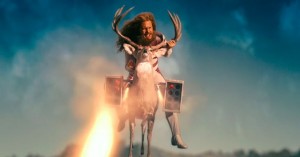 makes us cringe when we come across it in real life, and the films allows us to laugh at that, to diffuse it, and to collectively acknowledge that this isn’t something we want to be.  What also makes it work is that the characters in those Ferrell movies are, on some higher level, in on the joke; they’re not trying to be sympathetic.  The audience is not supposed to feel heart towards Chas Michael Michaels.  We know that and Ferrell knows that.  The comedy comes from the absurdity and the deflation of that personality trait.  Gentlemen Broncos never presents characters that are in on the joke, so Hess ends up asking the audience to essentially spend an hour and a half having a good time at the expense of these characters solely because they’re different than us and it just doesn’t work.

In Gentlemen Broncos, Hess presents a film whose comedy just felt like bullying.  There are some legitimate funny moments in the film, mostly lines from Chevalier that were just so Jermaine (Conchords fans will appreciate the random throw-away lines that reek of Clement’s style of humor), but it made me want to re-watch season 1 of Flight of the Conchords more than anything.  This is not to say Gentlemen Broncos is an overall bad film; it’s not.  It’s a decent indie-looking film that definitely shows technical control of a craft.  Hess successfully had a vision for the film and pulled off the look.  But a bully is still a bully no matter how well dressed he is, and the film just feels mean.  And personally, I think I’m beyond using humor as a way to attack the little weirdos in our lives.  Maybe the high school me would do that, but I now prefer my comedy to be more gentlemanly.

One thought on “Review: Gentlemen Broncos”