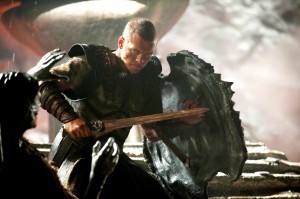 It’s sometimes hard to be a fan of big movies.  In many cases, you end up being an apologist for popcorn flicks when you say things like, “It’s ok to turn your brain off and enjoy the flashing pictures for 2 hours.”  You not only sound like an idiot who’s cool with letting the light behind your eyes dim while stale popcorn grease slowly dribbles down your chin, but you’re also extending a nacho salt-crusted hand to others, inviting them dim their watts down to 30 and let the airhead shenanigans unfold before them as well.  But the fact of the matter is: fun movies are fun!  And part of what makes some films great is that they’re just fucking entertaining.  There’s no call to dissect scenes, motivations, camera angles, lighting, whatever.  There are just fun conversations like, “That thing got blowed up real good!”  So yeah, big movies can be fun, despite their albatross of supposedly pandering to the mindless.  Unfortunately, every time we apologists take a step forward with a film like Iron Man, Hollywood knocks us back a few paces with films like Clash of the Titans.

And now, a list of evidence that Clash of the Titans is nothing but an attempt to pry dollar bills from us:

1.  Nostalgia cash-in:  This is sort of to a lesser degree as I’m not entire sure how much my generation has a soft spot for the original film, but the fact of the matter is, it fits the criteria for cashing in on our nostalgia for that magical bygone era known as “The 1980s.”  At this point, it’s a proven cash-in technique, thanks to films like Transformers, which proved that my generation is willing to get excited over the idea of something that we loved as a child is worth revisiting as an adult.  That movie really kind of did us in and we probably have it to thank for GI Joe, the upcoming A-Team movie, and Clash of the Titans.  Personally, I think I’m sort of tired of having my nostalgia played like that.  But I’m also fairly sure that I’m going to watch The A-Team.  My guess is I’ll be watching it wearily.

2.  Harry Potter-mania cash-in:  Harry Potter proved that people are willing to sit in theaters and watch movies that involve big action pieces surrounded with magic and magicians and such.  And who were more magical than the Greek gods?  The original magicians, the tricksters, a lightning bolt up your ass Zeus!  If it’s remotely magical, studios are pretty confident that a large audience will be entranced.

3.  It’s in 3D! cash-in:  Oy.  How Avatar has ruined things for us.  By now it’s relatively well documented that Clash of the Titans was a last minute rush job to convert what was supposed to be a 2D film into 3D.  The hasty work show:  people look like cardboard cutouts floating on the scenes, faces float off of bodies, and scenes are blurry and not at all blocked for a 3D representation.  I agree that a film like Clash of the Titans, with its big scorpions, swords pointing, debris flying, Gorgons slithering, could have been tailor made for an epic 3D event.  But director Louis Leterrier didn’t tailor make it for an epic 3D event.  I attended this movie with someone who had never seen a 3D movie before and was excited at the prospect.  You want to talk about being an apologist?  Try walking out of Clash of the Titans explaining how Beowulf was actually pretty good with the 3D stuff, even if it wasn’t that great of a movie to watch.  Yikes.

So yeah, the studio was clearly all about pulling your strings to get you to decide to spend $13 to see this movie instead of using those $13 for better things, like buying $13 worth of Nerds, having a Nerds-eating contest with yourself in your bedroom alone, and then throwing up $13 worth of Nerds for 3 hours, staring at the pink-brown mess accumulating in your toilet bowl while the sugar headache that is slowly pressing your left eyeball from behind gets more and more aggressive.  If their god-like trickery fooled you mortals into putting on the stylish 3D glasses, here’s what you got:

A bad, pretty action-less movie that has zero story, zero character development, and zero pacing.  The bland Sam Worthington dully plays Perseus, a boring fisherman whose family is killed by Hades, and so he somehow sort of becomes a unexciting leader of this army that he leads to, you know, clash.  With the Titans.  Except that he never actually clashes with Titans.  I think he sees Hades face-to-face twice but just sort of looks at him while Hades talks, he meets Zeus a few times but they just kind of rap with one another, the army sort of battles with these big scorpions  but that’s pretty quick and they mostly run from the danger, and for all of its hype surrounding the Kraken being released, the biggest thing that happens in the

film with the Kraken is that it shows up.  I mean, it’s a solid 2 or 3 minutes of the Kraken arriving, so that’s

sort of action packed.  And long.  Sort of like watching a Suburban coming down the street and then parallel parking in Boston.  But man, talk about a let down.  For Christ’s sake, the Kraken was part of the film’s tagline until the studio decided to change it to “The Clash Begins in 3D!”  Maybe they did this because they knew the Kraken was quite possibly the film’s biggest non-event, so they decided to sell the movie on it being a Magic Eye that doesn’t work.  The poor Kraken.  It really needs to have a proper screen representation.  It almost had it in Pirates of the Caribbean, but writers Rossi and Elliot literally wrote its death off screen and had it just found lying dead on the beach and sort of explained away.  Now it gets this death, which I won’t spoil for you as Clash of the Titans does a good enough of job of spoiling it for you on its own.

I think I’m incredulous about Clash of the Titans because, for all of the self-made bigness surrounding it, it was clearly a bad movie that knew it was a cash grab and used a last-minute 3D conversion to horribly cloak its banal-ness.  The movie was propped up by sure-fire elements of a summer blockbuster, but rested on that, hanging the flimsiest of a story on its tent pole so that it was one minor step above watching a 2-hour reel of B footage action sequences that are usually found under the editor’s shoes.  Movies like this give the legitimately good, fun, mindless summer blockbusters a bad name, knocking us apologists back into our darkened rooms where we can unashamedly love our Terminator 2s without scorn.  Clash of the Titans is a wasted opportunity for a fun action movie involving gods, demi-gods, and man.  Even if the writers decided to ignore the amazingly rich and plentiful soil of stories that the Greeks spent hundreds of years writing to the point where it is one of the three most referenced pieces of literature (and they did ignore them), at least have the gods do something!  Nope, they just show up for about 5 minutes and don’t really set things in motion.  The only real godlike thing Zeus does is hook Perseus up with a chick that was dead.  A wasted opportunity.  You suck, Clash of the Titans.