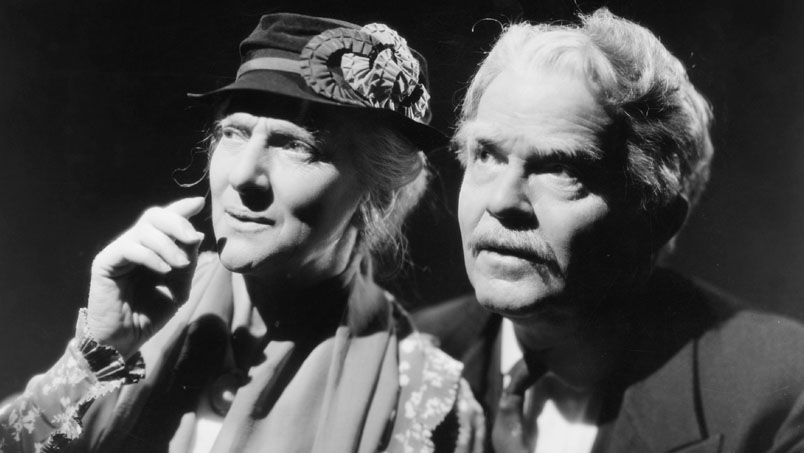 Sometimes people ask me why I watch so many movies, why I spend so much time reading about, studying and looking for hard-to-find old movies.  Now, as a response, I can just present them with a copy of “Make Way For Tomorrow.”  This is why I search through old movies.  This is something special.  Never before released on any home video format in the US, “Make Way,” is the kind of movie that anyone who has seen it sings the praises of so highly and so frequently, that you are compelled to see what all the fuss is about.  Such is the way with this movie.

Directed by Leo McCarey, and based on the book The Years Are So Long, “Make Way For Tomorrow” tells the story of Barkley and Lucy Cooper.  (Better known as Pa and Ma.)  As the movie opens, they have gathered their grown children at their house to tell them that, because of their financial position, they have lost their house to the bank.  The children are horrified, but promise to help, offering the parents a place to stay,  Unfortunately, only child one has a house large enough and she needs to make some chagnes before she moves them in.  So Ma and Pa are packed off to two different children’s homes.  At her house, Ma clashes with her daughter-in-law, as she tries to run a class to teach the finer points of bridge.  Ma’s granddaughter doesn’t feel comfortable bringing gentlemen callers around and is constantly sneaking around.  Meanwhile, Pa makes a friend in the neighborhood where he’s living, but his daughter and her family don’t approve.  They don’t like the rules changing.  They live how they want to live.

Eventually things change and the plot moves along, and Ma and Pa are finally reconnected before parting again.  The final sequence of the movie is a 30 minute walk through New York City and memory lane for the two heads of the family.  It is one of the most touching sequences of film I have ever seen.

Orson Welles reportedly called “Make Way For Tomorrow,” “The most depressing movie ever.”  While I didn’t find it that, I found it incredibly touching and moving.  It reminds me in many way of the opening sequence of “Up,” where you see how close these two people have grown together.

The movie was directed by Le McCarey, who is probably better known for his work with the Marx Bros., (“Duck Soup,”) Cary Grant, (“The Awful Truth,”) and Bing Crosby, (“Going My Way.”)  Released during the depression, “Make Way For Tomorrow,” was praised by critics, who at the same time warned audiences that the movie was terribly depressing.  Not surprisingly, they stayed away in droves.  When he won the Academy Award for “The Awful Truth,” McCarey thanked the Academy, but said he thought they gave him the award for the wrong movie.  (“Make Way,”) was released the same year.

“Make Way,” never seemed to get a fair shake.  That is, until now.  Continuing their tradition of releasing and reminding audiences of great, perhaps overlooked films, The Criterion Collection has released “Make Way.”  It is a highlight in their 500 plus films.  It is great to see a movie so overlooked for so long to receive this kind of loving treatment.  “Make Way,” deserves the rediscovery it have found recently.  Check it out.  Highly recommended.  -Sam