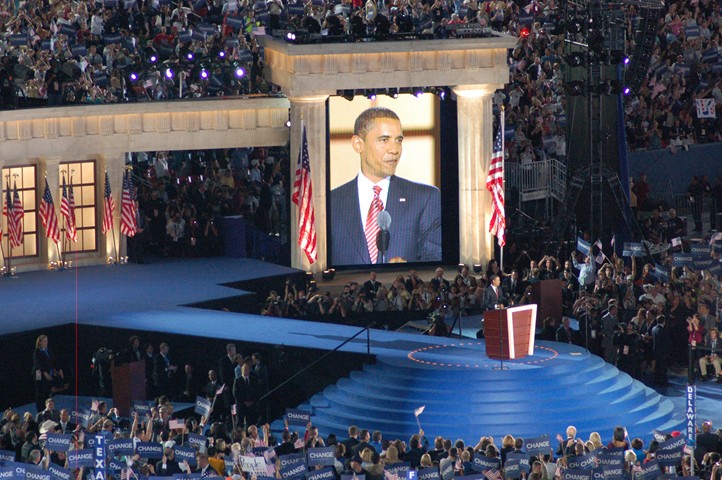 In 2008, as the Democratic party assembled in Denver, Colorado to nominate Barack Obama as their candidate, everything seemed to run smoothly.  Or did it?  AJ Schnack’s “Convention,” is the behind-the-scenes look at the convention, offering viewpoints as varied as the mayor’s office, a newly christened reporter on the political beat and a couple of experienced protestors.

Using a bevy of camera and sound people, these people are profiled as the convention prepares to open, and throughout the ceremonies.  Schnack’s group of filmmakers follows everyone closely.  The assistant in the mayor’s office has trouble getting passes for the man whose city is hosting the convention.  We also see the city officials overseeing the traffic signals.  They keep an eye on the protestors and coordinate with spotters on the ground to make sure nothing gets ugly.  Meanwhile the local paper has a new reporter.  She’s got the skills, but hasn’t done political coverage.  They assign her to Hillary Clinton delegate watch.  As the minutes wind-down to press time, she has to step up and deliver the story even if she doesn’t have time to write it.  The protestors call themselves ‘Re-create ’68,’ but seemingly will protest whatever anyone else will protest.  (Also, their organization needs some updating.  All they want to do is to be arrested, and when the police refuse, they have no real recourse other than turn around and go back from whence they came.  All of this is shown with Barack Obama and Joe Biden as Godot.  Everyone is waiting for them to arrive.

Unfortunately, while the filmmakers were hoping for a possible re-creation of the 1968 convention, nobody else wanted that.  Things went along smoothly.  This does not make for riveting filmmaking.  Also, because there is such a large cast of characters, Schnack is forced to cut between way too many story lines.  As a result, you just don’t care about the characters.  A woman who works in the mayor’s office is shown learning how to ride a scooter because she knows traffic will be terrible.  Do we see her riding the scooter to the convention?  No, we don’t.  Another Mayor’s office employee came to this country from Cuba as an orphan.  He’s particularly moved by then candidate Obama’s story.  Do we learn any more about this?  No, we don’t.

And in the end, that’s the problem.  Because there is too much going on, there is nowhere near enough focus on anything.  In the final scenes, we’re supposed to feel something because of the success (or lack of success, depending on which character you’re talking about,) of the convention.  However, the filmmakers simply give you the same soundbites from Obama and Biden that you heard on CNN.  It doesn’t matter if you were there.  You’ve already seen them on TV.

“Convention,” seems to draw a lot of inspiration from things like Richard Leacock’s movie “Primary.”  But what the filmmakers here seem to forget is that in that movie, Leacock was showing us a side of the political process we were not privy to.  Here,  there’s nothing new that we haven’t seen before.  And in the end, that makes all the difference.  -Sam