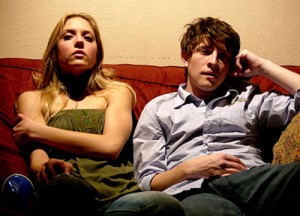 Going into a lot of these films this week at IFFBoston, I’m never sure how I’m going to feel after. When I read the description and various PR on ‘My Suicide,’ I found myself quite intrigued. Suicide is a difficult subject to breach even today, and its great to see a film tackle this heavy subject, and its even more important to note that it tackles it extremely well. ‘My Suicide’ approaches this subject a little less traditionally then most films. It’s told in a style that reflects the ever-changing spectrum of how we consume media. Through stock footage, youtube-like camera confessionals, and a shaky camcorder.

Archie Williams (Gabriel Sunday) is a cameraphile, a introverted, shy, but extremely emotional teenager. For clearly some time now he has been recording his inner feelings and thoughts, and expressing himself through video. After he’s introduced himself and his life to us through his eye (Read: Camcorder & Computer Editing Suite), we follow Gabriel to his video class. Gabriel informs his teacher that for his final video class project, he’s going to kill himself.

Archie’s world gets turned upside down following this statement. He’s then put through counseling, and questioned by his parents, teachers, and fellow students. They express shock, disappointment, and some even ask him how he’s going to do it, why, and when. Following this event, whenever you see Archie interact in public, you wonder, why would this nice shy kid even think about doing something like this? Was it for attention? Where is it coming from? But through his lens, we see Archie quite intimately, alone, in the dark of his parent’s guest house, struggling with his family life, his social life, and the world around him.

Archie then finds himself suddenly connecting with the “most popular girl in school,” the at-first unattainable Sierra (Brooke Nevin). Without giving crucial plot lines away, we watch Archie connect with Sierra, through her own struggles and personal losses.

The film is cut so tight, and so fast, for pretty much the entire first quarter, you are bombarded with imagery. Director David Lee Miller told the audience at the IFFBoston Q&A that ‘My Suicide’ looks the way that it does, because they wanted it to be a film that represented how Archie would have made his film.

By the last act, I was completely into the characters, and when certain events transpire, you can’t help but feel strongly for what is being played out on the screen. Miller together with the performance of Sunday make this film feel so genuinely real that at times you do forget the fact that the film isn’t an actual documentary pieced together from Archie’s footage.

We’ve seen films in the past few years represent the “Youtube” reality TV generation. Films shot and presented as if the characters in it were making it, from Blair Witch to Cloverfield. But ‘My Suicide’ presents it in a way that feels completely fresh. Archie is doing a bulk of the filming (as do other characters), and it really does feel like he’s the one doing the edits, doing the animations (which are wonderful), and in control of the entire film.

‘My Suicide’ is a unique take on a genre which I don’t even know has a name yet. It is a heavy, deep film that stays with you long after its over. I look forward to seeing it have a wider run hopefully by the end of this year.

I also wanted to take a moment to mention the Facebook page for ‘My Suicide,’ they are looking to build a community behind the film and its message, and if you saw the film, or are interested in learning more about it, you can find their Facebook page here.