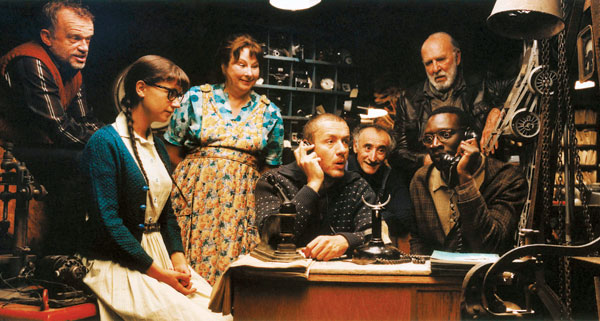 The world of Jean-Pierre Jeunet has gotten a little big larger.  After the original closing night film for the 2010 IFFB was pulled, organizers scrambled to find a replacement.  And with Jeunet’s latest offering, it was the perfect and quirky choice.

As the movie opens, a young boy named Bazil finds himself without a father after he is killed clearing a field of mines.  Thirty years later, Bazil finds him the recipient of a stray bullet from a chase happening outside the video store in which he works.  After doctors save his life, (but leave the bullet in,) Bazil finds himself homeless and finally meets up with a unique band of outsiders, living in an elaborate bunker in a city dump.  The outsiders are the types of folk who only live in Felini movies or, now, Jeunet films.  There is a contortionist, a man who insists that he held the world record for distance as a human cannonball, a woman who can call out distance, size and weight of objects with a glance and a man who hunches over a typewriter, reveling in every cliché and delighting in spewing out nonsense.  Bazil quickly finds himself part of the family.

One day while out searching for junk to bring home, Bazil finds himself in the middle of the street, with the headquarters of the maker of his father’s killer mine and the headquarters of the maker of the bullet lodged in his head on either sides of him.  He suddenly decides to extract his revenge.  This being a Jeunet movie, the revenge is elaborate, complicated and very, very unique.

“Micmacs” fits in well with Jeunet’s previous work, with his attention to detail and the unique outlook.  Also very evident, is his cast of characters, many of whom have appeared in previous films.  I’m not sure where he finds them, but every character in this movie is unique and almost cartoonish looking, which makes the proceedings even more entertaining.

If there is any problem I have with the movie, it’s that there is little danger involved in the caper.  The troupe vows to extract revenge, and they do.  There’s no worry of whether or not they’ll pull it off, it just happens.  However, Jeunet is clearing having such fun with the characters and the story, it’s almost possible to overlook the short comings.  Jeunet keeps things moving and, like his other movies, the attention to every detail is exquisite and you easily get wrapped up in the story.

The joy and fun captured in the movie are wonderful and the film races by.  If you’re looking for a heavy-handed and preachy movie about the business of warfare, look elsewhere.  If you want a fun night out, look at “Micmacs.”  -Sam