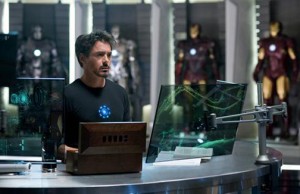 Robert Downey Jr. and Actor/Director Jon Favreau make a great team. Favreau is a great story teller that involves himself into his films, and its clear, all of them are made with love and passion. And Downey? Hell, he’s someone who I would watch in just about anything, and I mean that, it could be a three hour film of him making snide comments about a white wall. He still would make it interesting. That said, what about Iron Man 2?

Iron Man, to be honest, has never been a franchise I cared too much about, even as a child. I knew of him, I barely read the comics, and didn’t really watch the cartoon. I’m not a hardcore fan even in the slightest sense. I enjoyed the first film a lot more then I did. I didn’t run out to see it, and when I finally did, I was a bit disappointed I hadn’t seen it sooner. It was as fun, extremely entertaining superhero film, and I absolutely love how much it is being tied into the forthcoming Avengers film.

We start Iron Man 2 with Tony Stark (Robert Downey Jr.) having already revealed to the world that he is Iron Man. We see how the world has been stabilized just by his presence. This makes the United States government extremely uncomfortable. Their national security is in the hands of an eccentric billionaire and CEO.

Stark, behind the scenes is slowly being poisoned by the very reactor in his chest that is keeping alive.

On the side, we are introduced to a murky character named Ivan Vanko (Mickey Rourke) who is using old Stark blueprints to assembly his own Arc core, to bring punishment to Tony Stark, who belongs to what Vanko calls a family of “butchers.”

We are introduced to some new folks this time around, the angry US Senator Stern (Garry Shandling), and the d-bag CEO of Hammer Industries, Justin Hammer (Sam Rockwell), Stark’s major rival both in industry, and clearly in life. Don Cheadle replaces Terrence Howard as Rhodey (Warmachine), and does an excellent job in that part.

Rockwell is amazing as Hammer, in fact, next to Downey, I dare say he almost steals the show. Score, music, sound effects were excellent. And I love the “world” that Tony Stark inhabits. Everything from the Iron Man suits HUD, to the “computers” in his workspace, I love the look of this film. 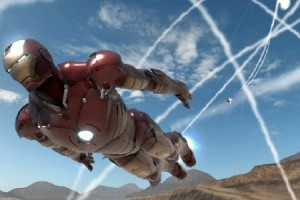 The story is good, and moves quite rapidly, however, the film is limited in its action sequences. Like the first film, Iron Man 2 suffers a bit due to its lack of a true “villain.” Though, the villains here are bad people, we never really feel like there’s a major struggle, and I do feel that the film falters in its final “battle.” I really wanted to see Iron Man kick ass, and he did, but just not as much as I’d hoped for.

The film continues to set up S.H.I.E.L.D. and the Avengers film with more appearances by Nick Fury (Samuel L. Jackson,) and I’m definitely excited for where its going. Is ‘Iron Man 2’ worth seeing? Of course, it was fun. Unfortunately though, a lot was lacking, and I hope it is all rectified by ‘The Avengers.’