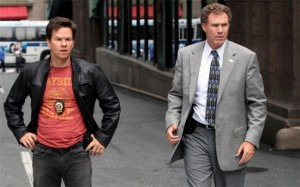 The Other Guys, the latest from comedy director and writer Adam McKay is an buddy-cop action-comedy starring Mark Wahlberg, and McKay regular Will Ferrell. Telling the story of oddly paired partners Terry Hoitz (Wahlberg), and Allen Gamble (Will Ferrell), the action comedy is fun, but in the end, flawed.

Allen is a forensic accountant who refuses to get out into the field, and Terry, has been stuck with Allen because of an accidentally shooting a celebrity (I’ll leave out who since it’s a fun cameo). The entire office (save for Terry) is enamored by the precincts top cops, Highsmith (Samuel L Jackson) and Danson (Dwayne Johnson). When an accident takes their lives, Terry has his eyes set on picking up the slack.

The film is pretty ridiculous, and like all McKay outings, filled with great quotes. However, my biggest issue with the film is the lack of chemistry between Ferrell and Wahlberg. It’s sad when I can look at the poster for a movie, and just sense the lack of chemistry in that. They just didn’t play well off of each other. It wasn’t awful, but anyone else (My first pick would be Matt Damon if not John C. Reilly) would have been better. It’s not even that I don’t like Mark Wahlberg, I definitely do, he’s a great actor, but he just didn’t go well with Ferrell.

The film suffered from some badly edited action sequences, but McKay isn’t an action director, and it didn’t take me out of it that much, but it definitely could have been better.

Things I did love: Michael Keaton, I was so happy to see him in this. He stole every scene he was in, and I’m glad to see he’s still got it.

I do feel like I’ll enjoy the film in future viewings. For some reason, films like this do grow on me from repeat cable viewings. But on first glance, my recommendation would be to wait for video for ‘The Other Guys.’