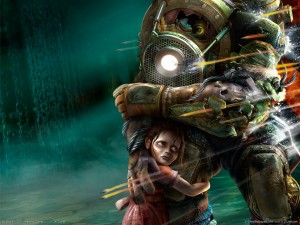 In a bit of unfortunate news, director Gore Verbinski spoke to ComingSoon.net about why he’s no longer involved with the BioShock movie.

BioShock is an incredible game which reveals an underwater city called Rapture. Populated by mutated beings, you learn about the terrible things that took place in the Ayn Rand inspired dystopian environment.

Verbinski said in the interview that he wasn’t interested in pursuing a PG-13 version. “The R rating is inherent. Little Sisters and injections and the whole thing. I just wanted to really, really make it a movie where, four days later, you’re still shivering and going, “Jesus Christ!”… It’s a movie that has to be really, really scary, but you also have to create a whole underwater world, so the pricetag is high. We just didn’t have any takers on an R-rated movie with that price-tag.”

Here is hoping they don’t pass it off to someone like Stephen Sommers, then I’ll really be bummed.