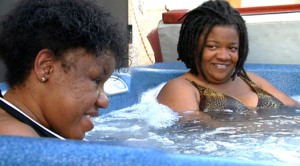 ‘Raising Renee’ from Newton MA based filmmakers Jeanne Jordan and Steven Ascher tells the story of artist Beverly McIver and her promise to take care of her mentally disabled sister Renee when their mother dies – a promise that comes due just as Beverly’s career is taking off.

The trailer paints an emotional yet heartwarming picture. The project born six years ago, as one of the filmmakers, Jeanne Jordan was a fellow at the Radcliffe Institute, working on their film ‘So Much So Fast.’ In the studio next door, was Beverly McIver, working on a set of paintings about her life. They formed a friendship, and out of that friendship came this story. The film explores family relations, race and class in America, and intellectual disability.

Ascher and Jordan have been making films for over 20 years, with previous documentaries winning countless awards, including ‘Troublesome Creek: A Midwestern,’ which won the Grand Jury Prize and Audience Award at Sundance, and was nominated for an Academy Award. Also, it is interesting to note that Steven Ascher (with Ed Pincus) wrote “The Filmmaker’s Handbook: A Comprehensive Guide for the Digital Age, essentially required reading by anyone going to film school since it was published.

‘Raising Renee’ screens Sunday, May 1st at 5pm at the Somerville Theater.