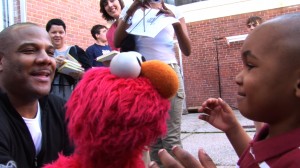 Tonight begins my favorite part of living in Boston, the first night of the Independent Film Festival of Boston, and what better way to start it off then with ‘Being Elmo: A Puppeteer’s Journey.’

The film tells the story of puppeteer Kevin Clash, and his journey from a 9 year old inspired by Captain Kangaroo and Sesame Street, to eventually becoming one of Sesame Street’s most well known characters, Elmo.

The film looks amazing, and all the pre-release buzz says if this film doesn’t touch you emotionally, you may be lacking a soul.

Opening night is sold out, but if you show up early enough, you could be lucky enough to score “rush” seats. Check out iffboston.org for more information.

One thought on “IFFBoston ’11 Spotlight: Being Elmo”