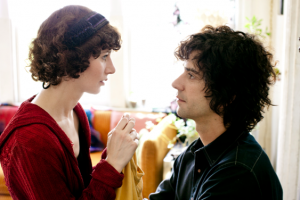 ‘The Future,’ is Miranda July’s follow up to her debut film ‘Me and You and Everyone We Know.’ It tells the story of Sophie (July) and Jason (Hamish Linklater), and their decision to adopt a terminally ill cat named Paw Paw.

Their good intentioned decision is to prevent Paw Paw from being euthanized at the Vet, and for the last six months they believe she’ll live, the pair will give her a happy life. However, it turns out that under good care, Paw Paw could live up to five years. Because of the constant care the cat will need, Sophie and Jason view the adoption of Paw Paw like getting a newborn baby, and quickly become terrified at the idea of losing their freedom. Given 30 days to pick Paw Paw up, they quit their jobs to use the last 30 days of freedom they have to do whatever it is they’ve always wanted to do.

The film deals with a relationships, and the struggles of making something of your life – all through July’s unique voice. The film takes place a world that looks like reality, but has fantastical aspects – we hear the voice of Paw Paw, a t-shirt that has a life of its own, and a Moon that talks.

Sophie and Jason are essentially living a bohemian lifestyle somewhere in Los Angeles, Jason doing tech support and based at home, and Sophie teaching dance to children. Once the two quit their jobs, Sophie decides she’s going to make 30 dances in 30 days that she’ll post on the internet, and Jason takes up the task of going door to door selling trees for a greener city.

Things become complicated when Sophie begins speaking with an older man, taking in the suburbs so to speak – a decision which changes many things between Sophie and Jason as the film moves on.

With July the word ‘auteur’ comes to mind – she has a unique style that if I started watching this film in the middle, I would recognize it as hers. The performances by all the actors can only be described as unique. They don’t necessarily “act” the way normal people do, but in this world, that’s ok.

Technology is featured quite a bit in ‘Future,’ the film opens with the two leads sitting on a couch typing away on their laptops, barely interacting with each other. A little into the film, Sophie cancels their internet, believing that anything they want to accomplish is going to be ruined by it. In the Q & A following the film, a question was asked about her reference to “Facebook” and the way technology is featured in the film. July said that it was important to show technology because it is such an important part of our lives, but she also had to take it away for anything to really happen to the characters.

Surrealist, dark, and emotional, ‘The Future,’ is a wonderful film, that will definitely be seeing a wider theatrical release in the next few months.

Check out some great video from the Q&A here!

One thought on “IFFBoston ’11 Review: The Future”