Editors Note: The release of this article was delayed due to technical problems on my part! Thanks for reading!

A VERY HAROLD AND KUMAR CHRISTMAS 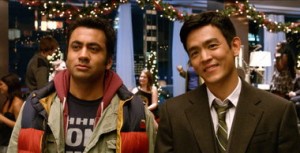 Maybe I’m just old, but I do not “get” these movies.  I’ve only seen the first one, and yeah, it had some amusing parts, but all in all I thought it was pretty lame.  I for sure didn’t think it warranted 2 sequels!  I’m happy for these two actors, because they really made a name for themselves with these films.  Now every Asian can be called Harold and every Indian can be Kumar and it’s not racist, right, since these characters are so beloved!!  And every gay guy can be Neil Patrick Harris (who I’m still convinced isn’t gay, and is just pretending to be gay so he can get girls to confuse fuck him).  I’m guessing these two are sort of the Cheech and Chong of this generation.  This doesn’t interest me, but I would much rather see this than another Dude Where’s My Car.

Ooohhhh boy…..here we go.  This movie almost seems to have a bulls-eye right on it’s ass and I’m 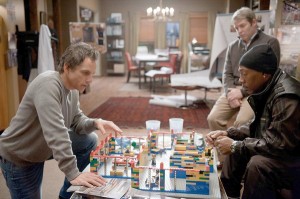 holding a crossbow.  Where do I begin?  Well, first off could they think of a worse title?  Tower
Heist?  I wonder what this movie is about??  It’s like the writers just walked into the production meeting and said “We want to make a movie about a hesit in a tower but can’t think of a good title.”  It’s probably less creative than if they just went with Robbery.  Now onto the cast.  Ben Stiller is hit or miss.  The guy can actually be funny, but a lot of times he’s really just trying too hard.  Is he supposed to be taken seriously in this?  Seeing him with a gun is about as intimidating as seeing an orangutan with a banana.  Then we have Matthew Broderick, aka one of the worst actors on the planet.  How has this guy had such a long career?  First of all, his succubus of a wife
has clearly sucked out any life this guy once had in him.  He’s so flaky now, it’s like he doesn’t even exist.  I barely noticed him in the trailers for this movie, and he’s supposed to be one of the main
characters.  The guy has really only made 3 good movies, and I will say it:  NONE of them are called Ferris Bueller’s Day Off.  He might be good on Broadway, but on the screen, he’s got the talent of a gay man at a pussy eating contest.  Then we have Eddie Murphy.  Oh, we all love Eddie Murphy.  Remember when he was awesome?  Beverly Hills Cop, Trading Places, 48 Hours…and then he just stopped giving a fuck, didn’t he?  When you really think about it, he has sucked, and I mean SUCKED, for well over a decade now.  Do you need proof?  Okay, well here is his filmography (excluding his voice overs) in order since Tower Heist:  Imagine That, Meet Dave, Norbit, Dreamgirls, The Haunted Mansion, Daddy Day Care, I Spy, The Adventures Of Pluto Nash, Showtime, Dr. Doolittle 2, Nutty Professor 2, Bowfinger (which I liked), Life, Holy Man, Dr. Doolittle, Metro, The Nutty Professor, Vampire In Brooklyn….I could keep going but I’m getting bored.  This is back to 1995!!!  Stop me when you see a great Beverly Hills Cop-esque movie in there.  There isn’t one.  Face it…we “like” Eddie Murphy because of the name and what he used to be, but he has been awful for a loooooong time now.  And now comes the main event, the director.  I’m not sure whose cock Brett Ratner is deep throating, but he must be pretty damn good at it because this guy still gets work. He is one of the most insulting directors out there.  Tommy from Pinball Wizard could direct a more convincing film than Ratner.  The Rush Hour movies are cinematic abortions. The Family Man made me want to vomit when they smash chocolate cake all over their faces and makeout.  Was that supposed to be fucking romantic? He even made X-Men look like the messy coloring book of a 5 year old retard.  I did like Red Dragon actually, but then I read an interview with the DP who said that basically Ratner didn’t direct that movie, and that he was basically vacant the entire time.  Makes sense that it was decent.  I would buy a ticket to this movie if, afterwards, I got a free plane ticket to Hollywood and was given a board with a nail in it and allowed to bash Brett Ratner in the face with it three times.  That MIGHT be worth the ticket price to see Tower Heist.

Next week actually has a movie I want to see!!