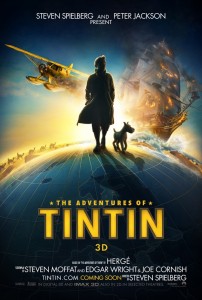 The original book series, ‘The Adventures of Tintin’ by Hergé was one of my favorite books growing up. Borrowed constantly from the library and read cover to cover, I always wanted to see a big screen adaptation of Tintin. But alas, Tintin’s heyday was far behind us, and even still, the series, at least in my time was never very popular. Mentioning it only brought the response, “You mean that show with the dog? Rintintin?”

When it was announced that Peter Jackson and Steven Spielberg were going to be bringing the stories to life in a feature, it was a no brainer. One of my other favorite characters growing up was Indiana Jones, whose adventures, despite being inspired by the old Republic serials, had to be also inspired by Tintin’s adventures.

‘The Adventures of Tintin: Secret of the Unicorn’ is the first in a series of films being produced by Spielberg and Jackson. It stars Jamie Bell as Tintin, and Andy Serkis as Captain Haddock. The script really merges a few elements from the various books into one complete story.

Tintin, a well known reporter, comes across a model ship at an outdoor flea market. Purchasing it from the vendor, he instantly is offered money by a mysterious American, who warns him of the trouble behind the ship, as well as by a man we come to know as Sakharine (Daniel Craig).

When he takes the ship home, an accident causes the ship to fall, releasing from the ship a small scroll, that holds a strange paragraph. Tintin’s journalistic instincts take hold, as he investigates the interest in his model ship.

The investigation eventually leads him to Captain Haddock, a mostly drunken Sea Captain whose family background ties into the secret of the Unicorn, and the two combine their efforts and become fast friends on their adventure.

The film captures the spirit of the books completely. Even to the point where I completely forgot where the lines of the different books they combined were. Also great are the characters of Thompson and Thompson (played by Simon Pegg and Nick Frost), hopefully the next film features these characters more prominently. 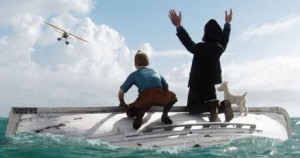 I’m not the biggest fan of motion capture, or 3D, but I thought the animation looked great. Not so realistic looking that it begged the question, “why do it this way,” and not so fake that it looked like a Veggietales film. One of my favorite parts of the film was a street artist in the opening scene sketching Tintin. The resulting portrait is literally a Tintin as drawn by Hergé.

While many who aren’t familiar with Tintin might not enjoy the film, it is easily accessible to all ages. It’s a fun, unique family film, that for once, does the source material great justice.

One thought on “Film Review: The Adventures of Tintin: Secret of the Unicorn”