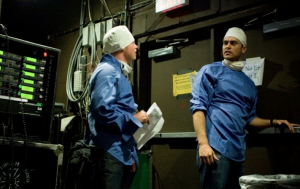 The intro-logline to the documentary One Night Stand sounds like a 24 hour film festival – it chronicles the creation of 4 musicals from blank page to live stage in just 24 hours.

The film looks really fun, and really interesting, and is directed by Elisabeth Sperling and Trish Dalton.

The film screens at the Independent Film Festival of Boston on Saturday, April 28th at 4:30pm at the Brattle Theater. Tickets are available at iffboston.org.