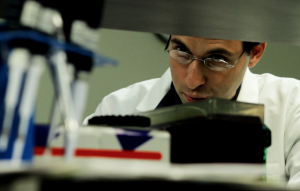 Rubberneck is an incredibly fascinating character-driven film about obsession and infatuation, directed by Alex Karpovsky, and written by Karpovsky and Garth Donovan.

Shot entirely in Massachusetts, it tells the story of Paul Harris, a research scientist who works on the outskirts of Boston. After a weekend tryst with a co-worker, his unreciprocated desires gradually turn into an infatuation.

The film keeps you on the edge of your seat throughout, and is certainly one of the not-to-miss movies of the festival.

Rubberneck screens at the Independent Film Festival of Boston, Tuesday, May 1st, at 9:30pm at the Coolidge Corner Theater. Tickets are available at iffboston.org.