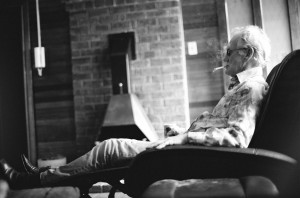 “The Devil takes care of their own,” someone proclaims in Beware of Mr. Baker. You quickly understand what that means in this fast paced, fast moving first-person documentary of Ginger Baker, the man, the myth, the legend.

Directed by Jay Bulger, who owes his career to Ginger – we fly over to South Africa to spend some intimate time with Baker as he tells the story of his sometimes outrageous past.

Bulger interviews Eric Clapton and Jack Bruce of Cream, Charlie Watts of the Rolling Stones, Johnny Rotten, and more. Baker’s career spanned many generations, from 1958 to today. The man influenced so much of what music and drumming is today, and it’s hilarious to hear his reaction when told that, exclaiming that if he’s the father of heavy metal, it “should have been aborted.” His story is told via archival footage, his friends and bandmates, old television appearances, and Ginger (though, sometimes seemingly unwilling) himself.

So how did the filmmakers get this great access? Baker, a private, and somewhat eccentric man received phone calls from Bulger a few years prior – who lied his way into contact, stating he was a reporter for rolling stone. He then went down to South Africa, and the article ended up getting published in Rolling Stone.

The filmmakers use a stylized animation to illustrate Baker’s stories – a tool they turned to when they had no other footage. It worked for them because Baker’s tales really are so outrageous, they almost sound made up. When you see the man, and how far he goes with Bulger, you know he is the real deal. 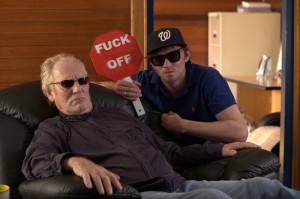 I love that the filmmakers left material in the film to show you just how difficult a person Baker was to work with. But in the end, he’s just being himself, and legitimizes the story that much more.

Despite his eccentricities, his behavior to his family and friends, one cannot deny Ginger Baker’s immense contribution to percussion, and the music scene as a whole. Remember, when you’re driving around a neighborhood and you see a sign “Beware of Mr. Baker,” you probably shouldn’t go in – you might end up with a cane to the face. So better play it safe, just see the movie instead.

One thought on “IFFBoston ’12 Review: Beware of Mr. Baker”