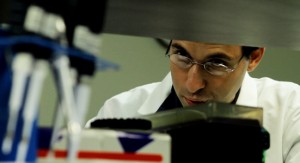 Rubberneck, from filmmakers Alex Karpovsky and Garth Donovan is a slow, calculated, brooding thriller. The film stars Karpovsky as Paul Harris, a research scientist working outside of Boston. He meets Danielle (Jamie Ray Newman), fairly new to Harris’ lab, and ends up hooking up with her following a Holiday party.

After their weekend tryst, Paul tries going on a date with her, but everything seems awkward – the passion and intimacy they found the night before has vanished as quickly as it appeared. Flash forward eight months, Paul, still working in the lab, awkwardly works around Danielle – definitely still carrying feelings for her.

A new lab tech starts, and he hits it off immediately with Danielle. Their flirting and joking around set off panic attacks in Paul. The closer they get, the more it effects Paul, and everything crescendo’s to a darker course of events.

Karpovsky does a great job embodying Paul’s character. He takes on various nervous ticks, that increase and change as events worsen. You can tell that something awful happened in his childhood, and that event molded Paul to have some of the issues he has today.

Despite some of Paul’s horrifying behavior, a part of you feels bad for him. His soul is tortured, and he doesn’t mean to harm or hurt anyone – he quickly finds himself in a bad situation, and is unable to stop the downward spiral. 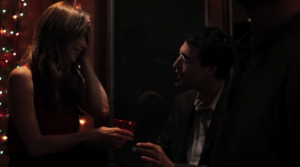 Shot primarily on the Canon DSLRs, cinematographer Beecher Cotton makes great use of the cameras to tell the story beautifully. The world Paul lives in is dark and cold, and it is illustrated beautifully. The films score matches perfectly what happens on screen, haunting, dark, and sad.

The low-budget film goes very far to tell a great story, and I hope that the film is able to find distribution. With its world premiere at Tribeca, I’d say the chances for that are excellent. To learn more about Rubberneck, and see the trailer, check out their website http://www.rubberneckfilm.com/.