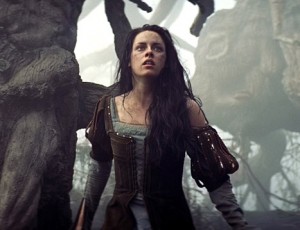 I’m always intrigued when classic tales are reimagined. Robin Hood, Ridley Scott’s take on the classic tale was flawed, but entertaining. What we have with Snow White and the Huntsman is another example of a decent but ultimately flawed reimagining – a film that is combines a lot of excellent effects and visuals, with a paper thin story.

After the death of his bride, Snow White’s father, King Magnus (Noah Huntley) remarries Ravenna (an excellent Charlize Theron), after rescuing her from the Dark Army, freeing neighboring kingdoms from the almost invincible glass soldiers. On their wedding night, it turns out Ravenna is actually an evil sorceress, and that the Dark Army is in her command. She kills the King, and takes over the kingdom. Snow White almost escapes with her father’s trusted Knight, Duke (Vincent Regan), but her escape is stopped. She is locked away in the dungeons. 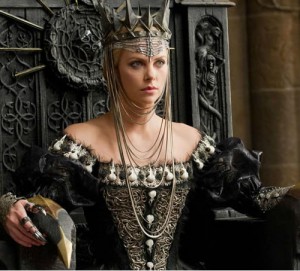 Ravenna keeps her beauty and power by consulting the infamous mirror on the wall. Her power comes from consuming the youth of others. 15 years after the coup, her powers are fading. Upon consulting her mirror, it tells her she will be immortal after consuming the heart of Snow White. She sends her brother Finn to retrieve Snow White, who escapes, heading for the dark forest.

Here’s where the Hunstman comes in. A widower played by Chris Hemsworth, he agrees to help the Queen, in exchange for her bringing his dead wife back to life.

The setup is really well done, its the follow through where the film falls apart. After the opening act, we really don’t delve deep enough into the other characters. While I do feel that everyone, including Kristen Stewart does the best they can with the material they are given, I don’t buy the characters transformations that lead to the third act of the film.

The visuals are stunning, the nightmarish Dark Forest, and the Queen’s powers are all illustrated in dark haunting visual effects. The costumes and production design are stellar, but in the end, it’s all for nothing when you don’t feel particularly involved in the story.

Kristen Stewart gets a lot of flak for her work on Twilight, but she is a talented actress (Check out The Cake Eaters for a great example), but there’s only so much you can with the material you are given. She does a great job looking scared, innocent, and running away from danger – but her transformation in the third act just didn’t feel like it had enough foundation.

The fight scenes were a bit confusing, quick cuts, and shaky camera movements make you lose track of who is who. The thing that probably bothered me the most about the film is that Snow White had two love interests that never really materialize into anything. I understand they were trying to make the film more modern, and it was their own take on the classic tale, but some things just don’t work when you take too many liberties (See Van Helsing for another good example of that…). I do have to point out the excellent dwarves, (Bob Hoskins, Ray Winstone, Nick Frost, and more) they did a great job – not overly comical, and really well executed. Being introduced late in the film, they carry the late second and most of the third act.

Overall, its clear that Director Rupert Sanders may have bitten off a little more than he could chew with his first feature effort. While he shows talent in creating a film that has a very awesome unique look, he may need to spend a bit more time with the screenwriters in fashioning a tighter story.