Ruby Sparks, starring Paul Dano and Zoe Kazan is a fun, original romantic comedy from Little Miss Sunshine directors Jonathan Dayton, and Valerie Faris. Written by Kazan, she stars with her real-life boyfriend Dano, in a fun, and interesting concept.

Calvin (Dano), is a writer who peaked quite early in life. His first novel was published when he was 19, and he hasn’t (in his eyes at least) had a decent follow up since. Despite this fact, Calvin lives a rather comfortable life in Los Angeles, attending book signings, and being the objection of desire for girls who read his book while in High School. But, save for Calvin’s brother, Harry (Chris Messina), a sports agent, he leads a fairly lonely life.

Calvin frequents a psychiatrist, trying to work through his writers block. His doctor assigns him with some homework, to go home, and write something bad. He begins to write about a mysterious woman that has been the focus on his dreams. He finds himself inspired, and he starts writing more and more. Finding himself falling in love with the character he’s written, he continues to write furiously, if only to spend more time with her.

One morning, Calvin wakes up, and in true fantastical fashion, Ruby, the character he is writing, is making him pancakes in his kitchen. After the initial shock of materializing his ideal woman out of thin air. He accepts it, and carries on as if every things normal. Harry, shocked that his brother has literally invented a person, asks him to promise he uses the ability to control her via his writing, for “the sake of men everywhere.” Calvin however vows never to control her.

But, Ruby IS a real person, she feels, she has emotions, she has a temper. Despite having all the ideals Calvin wanted, the reality of the situation starts to come about, tempting Calvin into wanting to change her character. The film asks whether or not ideality actually exists, whether what one characters idea of the perfect woman is actually perfect when materialized. Also, the temptation of control, and the struggle of his character, especially in later scenes, is excellent.

There are great appearances in the film with Steve Coogan, another writer, and Harry and Calvin’s parents, played by Annette Bening, and the excellently cast Antonio Banderas. 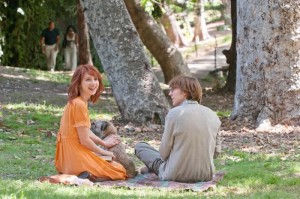 When the film opens, we see Calvin typing on a typewriter, which instantly had me worried that I was in store for a hipster romantic comedy, but as the film goes on it is clear that many of the choices the filmmakers made were not just for the sake of being cool. The typewriter is just another way that Calvin cut himself off from the rest of the world. Any further than that, he’d be writing things out by hand.

The chemistry between Kazan and Dano is great, they play very well off of each other. Daytin and Faris do a great job directing Kazan’s writing, and the film, shot on the Digital Alexa, looks excellent. The locales, much like 500 Days of Summer, are great at showing you a side of Los Angeles that isn’t usually seen in films that take place there.

Ruby Sparks is an excellent, entertaining, and genuinely funny romantic comedy. Kazan’s talents both on the screen and on paper are greatly highlighted, and this film stands out as a great alternative to the otherwise late-Summer doldrums.