Editor’s Note: The review is mostly spoiler free, however, as always with movies like this, we recommend you see the film prior to reading this review. 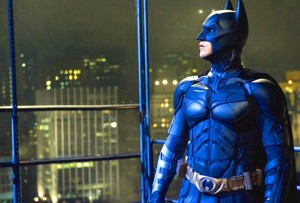 The Dark Knight Rises is director Christopher Nolan’s third visit to the characters and universe of Batman and Bruce Wayne, and according to the director, his last. Christian Bale and the rest of the original cast returns, in a film that is certainly the epic conclusion promised by the films marketing campaign. The villain this time, is the almost superhuman Bane, played by Tom Hardy.

We meet Bane as the film opens, a scary looking fellow with a breathing apparatus that covers most of his face. In a stunning action, they hijack a plane mid flight, and kidnap a captive of the CIA. In a world where the seams of most stunts are quite apparent thanks to poor CG, this particular stunt definitely leads the audience to ask, how did they do that?

Eight years following the death of Harvey Dent, and the fall of the Joker – Batman hasn’t been seen, and Bruce Wayne has hid in seclusion. With the Organized Crime completely eradicated thanks to the Dent act, Gotham is safe.

During a fundraiser held at his house, one of the help is asked by Alfred to bring a meal up to the wing where Bruce Wayne has been living in seclusion. The help turns out to be Selina Kyle (Anne Hathaway), a cat burglar, who breaks into Wayne’s safe, and steals his Mother’s pearls.

The plot thickens, as we learn that John Daggett, a business rival of Bruce Wayne’s, has sought the help of the likes of Bane and Selina Kyle, to enact a plan to take over Wayne Enterprises. However, Bane’s plan is far more sinister, and goes down a path that sends Gotham spiraling into a darkness that is completely unprecedented.

As a series, I don’t feel like the last film, The Dark Knight, called back much to the first film, Batman Begins. However, this movie is tied closely to Batman Begins, and I definitely recommend rewatching Nolan’s first entry into the franchise. While, I enjoyed Batman Begins, and it is certainly an excellent origin film, this is a much stronger movie, with a villain that is like nothing we’ve seen so far in Nolan’s Batman Universe. 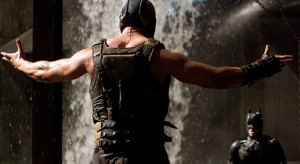 Bane’s booming, frightening voice reverberates the theater, and is matched by his strength, providing a perfect rival for Batman.

Much like the unfounded criticism that was initially received from the internet when Heath Ledger was cast as the Joker, Anne Hathaway also fell victim to this same sort of assumptions. She was excellent as Catwoman (important to note, she is not once referred to as that), and filled her shoes [edit: stilettos] well. The always excellent Joseph Gordon-Levvitt was great as Blake, an orphan that was inspired at a young age for good by Batman.

The sweeping aerial shots shot on 70MM IMAX film were dizzying and gratifying. If you haven’t seen this film in true IMAX, make it a point to go again, I’d take IMAX over 3D any day of the week. If Nolan were to release a feature of all the IMAX B-roll he acquired shooting this movie, I’d be there. Hans Zimmer’s score is the perfect underline on every scene in the film, it tells us exactly what we should feel and when..

The film is long, clocking in at around 2 hours and 45 minutes, however I didn’t feel like any of it dragged. I found the pacing of the film perfect, and it was as long as it should have been. 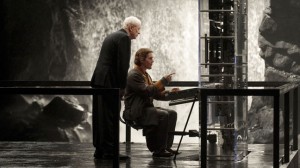 The film’s title The Dark Knight Rises is a perfect summary of what happens in this movie. Nolan’s conclusion shows a Gotham in despair, and the rise of the hero and symbol that many longed to return. I really enjoyed the film, and I’m completely satisfied with its end. Part of me does wish that Nolan would rethink his thoughts about the series, however, another part of me is happy that he ends his time with it on this high note. We’ve seen what the series can become under certain hands, and I hope that the series stays where Nolan has left it, but only time will tell.