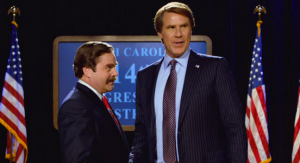 I don’t know about you, but I’m quickly getting tired of the Presidential campaign, and we still have a few months before election day. So, the last thing I really wanted to see was a movie about politics, but they do say comedy is the best form of relief. Enter Jay Roach’s “The Campaign,” starring Will Ferrell and Zach Galifianakis.

Congressman Cam Brady (Ferrell) is up for reelection in the 14th District of North Carolina and is running unopposed. Brady, accidentally leaves a sexually explicit voice mail that gets leaked to the press. So, corrupt businessmen the Motch Brothers (no doubt caricatures for the real life Koch Brothers), played by John Lithgow and Dan Akroyd, are looking to run a man that they’d be able to control.

They pick Marty Huggins (Galifianakis), the son of an old friend, and tour guide for the town of Hammond, NC, to run on the Republican ticket. If you’ve seen Galifianakis’ comedy special “Live at the Purple Onion,” Marty is essentially Seth, Zach’s “twin brother,” a character he created many years ago. Kind, well meaning, and slightly effeminate, Marty’s life get’s turned upside down as the Motch Brothers bring in campaign manager Tim Wattley (Dylan McDermott), a hard ass political genius that completely revamps Marty’s image. Including replacing his two lovable Pugs for a labrador and golden retriever, since those are more deemed “American.”

Marty, initially starting as a clean, fair campaign, is forced by Wattley to up his game. The two go back and forth, each action outdoing the prior, especially in laughs. Without spoiling anything I’ll say this, in this campaign, literally nothing is sacred, or off limits. The film used its R rating well, with raunchy jokes and language throughout. It teetered on the line of ridiculous perfectly.

The Campaign does an excellent job lampooning the state of our politics. Though, much of the film feels eerily real, it’s still nice to sit back and laugh. Ferrell and Galifianakis play perfectly off each other, their comic timing is almost unmatched. If you’re looking for an alternative to the mud-slinging campaign ads, this is the perfect film for you, it reminds us that, hey, it actually can get more ridiculous.