‘Looper’ had a pretty good challenge when it came time to promote. How do you promote a movie when you need to avoid giving anything away. This problem gives me a similar challenge, how can I talk about a movie that is difficult to discuss without ruining it? Very carefully.

Rian Johnson’s third theatrical effort (my second review of this week that is a filmmakers third feature film) follows his well established pedigree. ‘Brick,’ was a well constructed modern noir tale, and ‘Brothers Bloom,’ an excellently built “twisty-turny” con tale. With ‘Looper,’ Johnson enters the sci-fi arena, and the result, is great entertainment. 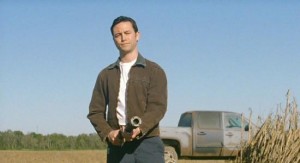 Returning to Johnson’s stable is Joseph Gordon-Levvitt, Hollywood’s current “it” man. Gordon-Levitt is doing an amazing job and making excellent choices in his projects, and ‘Looper’ gives him an opportunity to even further his range.

In the year 2044, the United States has suffered a total economic collapse – in the future, 2074, time travel exists, but is only used by organized crime to send back bodies for execution. The executers are called loopers, folks who have entered this business and work until their “loop” is closed. The way its closed is, you future self is sent back for you to execute. You’re paid off in silver, and you live out the rest of your years doing whatever you want.

Joe (Gordon-Levitt) works as a looper, having been saved from a life in the street by a crime boss named Abe (Jeff Daniels), sent to 2044 from the future to set things up and keep things in order. Joe’s day is a routine, he gets his assignment, carries it out, incinerates the body, then parties/does drugs at night.

This is where Joe’s life starts to get complicated. Suddenly, he notices more “loops,” are being closed than usual. His friend Seth (Paul Dano), hesitates when his own loop shows up, and passes information to Joe that causes some epiphanies (I’ll abstain to keep this spoiler-free). When Joe is out on a job, and his future self (Played by Bruce Willis) shows up, his life really does get turned upside down. 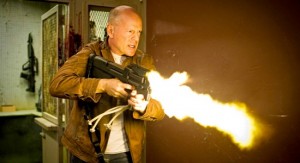 This is one of the rare occasions where in all the promotions managed to keep the single most important part of the story in ‘Looper,’ a secret. The movie, while just as much about Joe and his predicament, is also just as much about the ethical nature of changing events. There is a whole angle to the film that I won’t delve into now that develops a bit rapidly. While, I enjoyed where the movie went, there was something about the balance and pacing of these events. It doesn’t hurt the movie, but, I feel like there was a little bit missing that would have made this transition more complete.

The film is visually striking – great composition, cinematography, lighting and production design paint the future as bleak, but realistic. The film doesn’t linger too much on the “future,” however, everything we do see does seem plausible. I love some of the subtle references to the past, for example, Joe drives a “classic” Miata. If that is a classic car in 2044, things are definitely bleak.

Joseph Gordon-Levitt’s impression of Bruce Willis was spot on, and the subtle physical changes via make up definitely added to his character. With ‘Looper,’ Johnson jumps to mainstream cinema with grace. He proves that he can create an excellent story that fills seats. I definitely think the film is worth checking out, and hopefully, you’ll take the time to see his previous efforts. There are big things ahead for Rian Johnson, and I can’t wait to see what he does next.