When Peter Jackson announced that he had begun preproduction on “The Hobbit,” it came as no surprise. Jackson made 3 amazing films out of the Lord of the Rings, and there was no way anyone else would be brave enough to adapt The Hobbit, at least without Jackson’s blessing or watchful eye. The release has not gone without controversy, the fact that it’s being split into 3 films – the fact that it was filmed in 3D and at 48 frames per second. All I cared about was, despite having a few so-so follow ups to his amazing trilogy, does Jackson still have it?

The Hobbit: An Unexpected Journey opens with a bit of a nod to Fellowship, Bilbo Baggins (Ian Holm reprising his role as the aging hobbit) is beginning his book, a memoir of his adventures. Frodo helps put up Bilbo’s “No Admittance” sign, then runs off to meet Gandalf (Ian McKellen). The story then goes back 60 years, with Gandalf’s arrival at Bilbo’s (now played by Martin Freeman) door. He is tricked by Gandalf in hosting a party for a band of dwarves, and is recruited as the group’s burglar as the team is setting out on a quest to reclaim the Dwarf Kingdom of Moria. The group’s journey is plagued with challenges, from Trolls, to Orcs, and they finally find themselves in Rivendale, where Gandfalf seeks the guidance of Lord Elrond (Hugo Weaving).

The film is a sweeping adventure like one would expect, with beautiful cinematography, and excellent action. New Zealand IS Middle Earth, there’s no doubt about that.

Martin Freeman was born to play Bilbo, his quiet nature, and excellent comic timing is a perfect fit for the role. The Dwarves are all excellent as well, but, I’d be hard-pressed to recall any of their names, save for the leader, Thorin (Richard Armitage). I loved the humor of the dwarves, and I’d see the movie again just for the dinner party scene.

My favorite scene in the film is Bilbo meeting Gollum. It’s not just some of the best interaction between a live action and all CG character, but one of the best scenes between two characters I’ve seen all year. It’s a crime that Andy Serkis doesn’t get the recognition he deserves for the performances he gives. Also, its amazing to see how far CG has advanced from Lord of the Rings, the detail you can see in Gollum’s face in the close ups is insane. 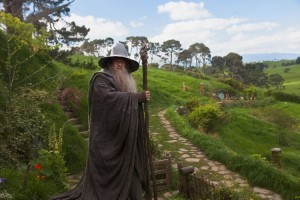 I went into this film very skeptical, peoples reactions have been polarizing, but I was pleasantly surprised. It’s a great adventure, and definitely a film you shouldn’t miss, Jackson still owns Tolkien.