Alt-J is an indie synth pop band from Britain. They also mix in a little folk and blues creating a rather unique sound. Their first album, An Awesome Wave was released in 2012 and won the Mercury Prize in the UK. This album hints at a few different music genres, film and literary references as well as applies a creative use of instrumentation. Alt –J layers island drumbeats over keyboard synth clicks, guitar, shaker sounds, metallic clinks and tops it all off with nasally vocals. However, what could come off as messy and overly complicated actually turns out to be effortlessly experimental and surprisingly unpretentious.

The album begins with “Intro” a short song with subtle vocals near the end. Like easing your way into a pool that you don’t know is too hot or cold to swim in, An Awesome Wave eases you into their sound. The second song on the album, “Interlude #1”, is an a capella song where you are introduced to both the singers, Joe Newman and Gwil Sainsbury. The band is also comprised of Gus Unger-Hamilton on keyboards and Thom Green on drums. Newman’s voice is unusually nasally. He sings as if he’s sanding something against the grain. However his aesthetically displeasing voice works well with the instrumentals. He adds a discordance that creates layers of depth. What could easily be construed as annoying comes off as unique and interesting. 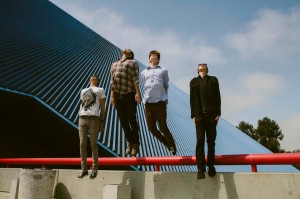 The album then bounds straight into “Tessellate,” where you hear Alt-J explicitly and cheekily express their admiration for the keyboard shortcut on mac computers (hitting alt and j at the same time) which creates the delta symbol, when Newman croons “triangles are my favorite shape.” “Tessellate” has a haunting and lonely sound to it. It has a feeling like a Clint Eastwood-style western standoff. On the next song, “Breezeblocks,” Newman’s voice slides up and down right along with a cling clanging that sounds like a toy piano. He  manipulates his voice moving from nasally to more elegantly soulful. Some of the songs like “Breezeblocks” as well as “Matilda” are romantic and somewhat heartbreaking, while “Dissolve Me” is a little 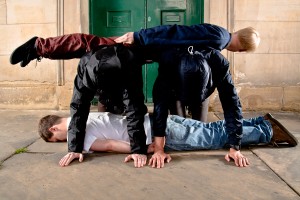 bouncier hinting at Nintendo sounds and island beats. The album ends with “Taro,” which throws in a little bit of a Bollywood sound.

Alt J is like a combination of Radiohead, a more polished Animal Collective and a little Hot Chip. They have an overall entrancing sort of sound. Some of the mixing of different genres sounds slightly erratic and unnecessary, but overall it creates a unique and interesting sound. An Awesome Wave is definitely worth a listen.

One thought on “Album Review: Alt-J – An Awesome Wave”