“21 & Over” is the directorial debut for “Hangover” writers Jon Lucas and Scott Moore. Jumping off the success of “The Hangover,” Lucas and Moore look to bring the same style of zaniness to the college crowd.

The film opens with the arrival of Miller (Miles Teller) and Casey (Skyler Astin) to the Seattle area. They’ve come to celebrate the 21st Birthday of one of their childhood friends, Jeff Chang (Justin Chon). Their plans are complicated, however, when the visiting friends discover that Jeff Chang’s father (François Chau) is also in town, taking Jeff to an extremely important med school interview the next morning.

Miller, the fast-talking loud-mouth, convinces the crew to go out for an early night, intending to move the hardcore partying to the next day after the interview is over. But, as movie archetypes will tell you, this won’t be happening – Jeff Chang gets drunk and wanders off, and his two friends have to find him before his interview. So begins one ridiculous scenario after another, from raiding the Latin Girls Sorority House to an over-the-top escape from a hospital – Miller and Casey go to hell and back to make sure Jeff Chang doesn’t screw the rest of his life up.

Given the background of the writers, the film was most definitely pitched as something like “The Hangover” meets “Superbad” – a crazy night coupled with a bit of coming-of-age. But where “21 & Over” fails is in its direction: Lucas and Moore are clearly able to write a decent story, but the direction of the talent is severely lacking. All the actors feel like they are filling their stereotypical roles and not giving the characters any range – the opening 20 minutes has Miller fast-talking and yelling on a single note. The same can be said for most of the characters, not to mention the lack of chemistry between Skylar Astin’s character and the one-dimensional love-interest played by
Sarah Wright. 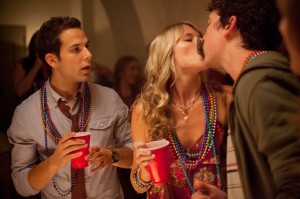 “The Hangover” excelled at its comedy because the actors were seasoned comedians directed by an extremely talented comedic director, one who understands that characters don’t just need to fill their stereotypes – they have to have more than one dimension or the rest of the film will fall flat.

My other major issue with the film is that the characters make certain choices and the narrative goes down certain paths simply to serve a joke, then these choices and directions are dismissed. For example, a gun is introduced at one point and some serious questions arise; however, the tension and concern over why a character had a gun is put out of mind with a flimsy explanation. The gun is introduced so one character can fire it at one of the villains – a weak tool used for a cheap joke. If you’re going to give a character a more complicated back story, you have to commit and not just shrug it off because it’s the easy thing to do and you need an excuse to throw a firearm into the mix.

The film has its entertaining moments, many of which are highlighted in the trailers. I have no doubt in my mind that the film will fill seats with folks looking for another “Hangover” like experience and I’ll say this: the movie at least made me feel like I had one.