The early 90s was quite the time period for revolutionary music: acts like Nirvana and Sonic Youth defined the new generation of music. While popular music shifted toward grunge and alt rock, the underground music scene spawned the feminist punk rock movement. At the forefront were artists like Kathleen Hanna, subject of the documentary “The Punk Singer.”

“The Punk Singer” starts at the beginning of Kathleen Hanna’s punk rock career when Hanna first connected with her Bikini Kill bandmates at Evergreen State College in Olympia, Washington. Coming from a background of performance art and spoken word, Hanna tells us right from the start that the best advice she was given was to put her work into music; that way, people would listen. 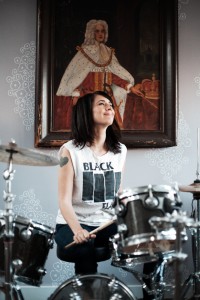 Hanna and her band’s influence on the scene at the time was an upheaval – asking girls to the front, calling out rage-filled moshing boys; their influence on “fanzines,” and the founding of Riot Grrrl. The film features interviews with scene staples like Kim Gordon, Tamra Davis, Corin Tucker, and other friends and colleagues of Hanna’s.

The film also delves into Hanna’s short time with Le Tigre, and the struggles she faced just as that band was really getting started. The doc melds together amazing archival VHS footage, and is wall-to-wall with Hanna’s work. It delves into her controversy, the band’s media blackout, and her relationship with Adam Horovitz of the Beastie Boys.

The film is fast-paced and holds interest throughout, even if you aren’t necessarily familiar with punk rock or Hanna’s work. The mixed-media of archival VHS and high quality interviews works, and the score (mostly Bikini Kill and Le Tigre) works is great.

The film has screened at SXSW, IFFBoston, and soon at Hot Docs. I highly recommend checking this out as it makes the festival rounds.