The film opens with Duncan in the back seat of Trent’s station wagon, staring vacantly. His trance is interrupted by Trent, who asks menacingly through a rear view mirror what Duncan considers himself on a scale of 1-10. Duncan responds that he believes he’s a 6; Trent disagrees, saying he’s a 3 and he thinks Duncan should try to push that number up this summer. The family arrives in a vacation town and as soon as they start to unpack, are greeted by neighbor Betty (played hilariously by Allison Janney), the perpetually buzzed divorcée who’s in town for the summer with her two kids. Duncan’s misery grows as he meets each and every one of Trent’s empty, booz-filled friends. 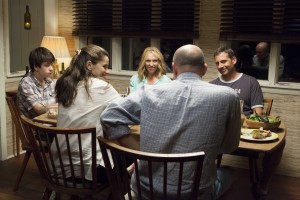