The Occupy Wall Street movement was a fascinating event in our recent history, and was covered extensively by the media. In the documentary “99% – The Occupy Wall Street Collaborative Film,” filmmakers Aairon Aites, Audrey Ewell, Nina Krstic, and Lucian Read, set out to tell the story that wasn’t covered by news outlets, showing the movement through the eyes of the people on the ground.

This film is the result of collaboration between a group of filmmakers and covers many different parts of the movement. Ambitious in scale, the filmmakers did a great job putting together a cohesive, clear story that feels like the vision of a single filmmaker as opposed to a series of disperate pieces cut together. 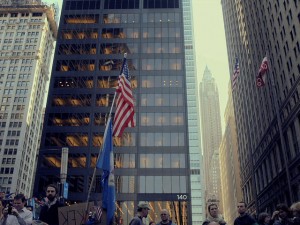 The doc spends a considerable amount of time explaining, through the voices of experts, why the movement started and gives a clearer idea of some of the movement’s goals. Going into the film, I had hoped the filmmakers would spend some time on just what the movement accomplished, but the outcomes of Occupy Wall Street are only briefly touched on in the closure. Absent from the film is the opposite side of the story, but this was not a surprise.

The film featured an excellent soundtrack that amplifies the intensity of the events the film chronicles, especially the police conflicts in Oakland and New York City. Clearly, a lot of attention was paid to the sound design, which is a welcome detail considering the extensive amount of
amateur footage used in the film; it all mixed together really well.

“99%” is a provocative documentary, with tight, fast-moving editing. I think the filmmakers accomplished their goal of setting the record of the movement straight without the filter of mass media.