“Lonely Boy,” from director Dale Fabrigar and writer/lead Alev Aydin, is an original film about a man afflicted with schizophrenia. A small, independent feature, the film has strong characters, and builds slowly to a riveting third act that leaves you at the edge of your seat.

The film opens as Frankie (Aydin) is called into a meeting at work with a man sent from corporate. The company has searched Frankie’s locker and found a strange manifesto inside, and when Frankie is questioned about it, he freaks out and quits his job, leaving his employers baffled.

Frankie gets home and sets the dinner table for four; when the doorbell rings, in walks a large fellow (Greg Vrotsos) and his two young daughters. The man starts speaking, but no one at the table is saying anything; Frankie joins the conversation, but no one else’s lips are moving. The camera pushes in, and, as it pulls back out, it’s revealed that Frankie is alone at the table. 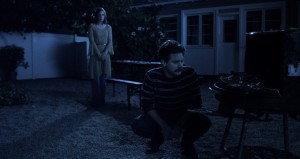 Frankie’s schizophrenia, though a worry, leads to some interesting situations in his daily activities such as grocery shopping and dating. The film has a great balance of intense moments coupled with comedic situations that worked really well. Frankie is an interesting character and at the point when we join him in the film, his schizophrenia is manageable, though he has the potential to become a danger to himself and his sister (Melora Walters) and brother-in-law (Mackenzie Astin) are concerned. While at the grocery store, Frankie connects with Alex (Natalie Distler), a strong female character who’s amused by Frankie but also interested in getting to know him better.

There were some great choices made in the film’s editing – Fabrigar and the crew use some very effective practical effects to reveal and remove the characters only Frankie can see. The score is haunting and further enhances the mystery of Frankie’s psyche.

The film marks a great collaboration between Fabrigar and Aydin – lensed beautifully on the Red and featuring great character actors like Richard Riehle, the film is entertaining and crescendos slowly to an intense finale. It’s hard to talk about “Lonely Boy” without giving away all the great parts, so I leave you with this: I highly recommend checking it out as it makes its festival rounds.