Over the past couple years, the demonification of the wealthy has been riding pretty high. With the Occupy Wall Street movement and a Congress that grows increasingly disconnected from the voting base, the wealthier have become an easy target; currently having more in common with Lex Luthor than Daddy Warbucks. However, this focus has been placed firmly on the banking industry and politicians, and let’s be honest, we all know that there are plenty more rich people that can do just as much bad. Enter “The East,” a thriller offering just enough to set itself apart from the dregs of its genre, to remind us of the villainy of corporate America.

In “The East,” Sarah Moss (Brit Marling) works for a private intelligence firm with a focus on corporate protection. For Sarah’s first assignment she must infiltrate an anarchistic collective specializing in a dramatic form of eco-activism. Upon her acceptance to the group, she begins to see more fully the world that the East fights. As she becomes more sympathetically attached to the collective, especially to its leader Benji (Alexander Skarsgård), she must decide to which side she will pledge her allegiance. 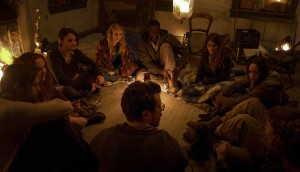 The East is the second film from Zal Batmanglij and Brit Marling. Their first film, “Sound of My Voice,” similarly centered on an outsider slipping into a devoted group in order to expose its nefarious roots. The two films share many similarities, a charismatic leader, devoted followers, and an investigation that is turned on its head, but they find a way to be strikingly different. While both films were produced independently, Sound of My Voice feels much smaller. Despite skewering the corporate world, “The East “plays as more commercial, both to its benefit and detriment.

On the acting front, we have a full house. Brit Marling acts as the audience surrogate and does a great job. She plays the role with the right mix of curiosity and hubris that subtly draws you closer and within the world of the film. While Skarsgård is there to fill what seems to be his typical role of menacing yet attractive male, Ellen Page’s Izzy and Toby Kebbell’s Doc prove to be the most interesting members of the East. Page’s performance hews closer to Hard Candy than Juno, crafting a character that is sympathetic and bullish. Kebbell’s Doc would easily win “Most Well Liked” in the East’s high school yearbook with a heartbreaking back-story and unfaltering drive. Jason Ritter also shows up as Sarah’s put upon boyfriend and I can happily say is somehow able to sidestep the massive pothole of a cliché that his character by all rights should have fallen into. 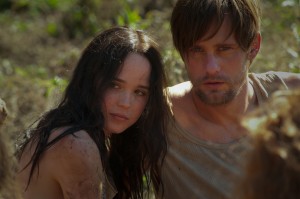 The film is playing in a very large sandbox. Espionage thrillers have become a dime a dozen and as such it can be easy to blend into the woodwork. Marling and Batmanglij manage a script that can occasionally veer towards the common, but in some ways this feels necessary to the story. In short, the film works, and if it were to take some unnecessary turn to verify its independent roots it would be distracting. Batmanglij’s direction is unobtrusive, allowing the viewer to be more fully engaged. One scene in particular sucked the air out of the theatre so completely that it nearly dared you not to hold your breath until its conclusion. The film’s final shot feels perfect, however we are then force-fed a series of images played over the end credits that nearly ruined the film. These images served up a forced explanation that seems to talk down to the audience, and ironically felt like something that was ordered by some disconnected executive.

The themes of “The East” are inarguably current, but it is the film’s execution that allows it to feel timeless. Zal Batmanglij and Brit Marling can boast their independent roots, but the film feels like a marriage of independent sensibilities and studio ways. The film isn’t breaking any new ground, but is that really a bad thing? Despite an unfortunate end credits sequence, “The East” is a thriller that will hold you close and leave you aching for the next moment, managing to stay a few strides ahead of a pack of mundanity.

One thought on “IFFBoston ’13 Review: The East”