Here it comes, your new weekly flavor of the world.  Foreign Fridays are here to remind you that the international community offers just a bit more than different kinds of food.  I now realize that this is sounding a lot like a column about food, but don’t worry it’s about movies.  Here I will highlight a film from somewhere other than America in a quest to get you to start reading subtitles.  This week’s international entrée (last food reference, I swear) comes from Sweden with the sonic delight of “Sound of Noise.”

From the directing team of Ola Simonsson and Johannes Stjärne Nilsson, the plot of “Sound of Noise” is far from complicated.  Amadeus Warnebring (Bengt Nilsson) comes from a house built on music.  Both his parents are musicians and his younger brother Oscar is a wunderkind composer.  Unfortunately for Amadeus he is completely tone deaf.  Now a police officer, Amadeus seeks to avoid music at all costs.  Meanwhile, a collective of six drummers led by Sanna (Sanna Persson) and Magnus (Magnus Börjeson) are disturbing the peace throughout Sweden with anarchic public performances of Magnus’s masterpiece, an opus that will challenge the community’s concept of music.  Due to a particularly strange quirk, Amadeus is the only one that can catch the musicians.

(If you were able to get through that summary, and the especially Nordic names contained within it, I now invite you to take a quick breather.  The Swedes don’t mess around when it comes to names, do they?  Don’t worry; I’m not real sure how to pronounce most of them either.  Now, let’s get back to the film.) 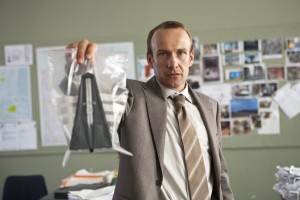 As I said before, the premise is pretty basic.  It is little more than a police procedural.  But it is that “little more” that really sets it apart.  Think back to the mid-90s.  Are you there?  Ok, put down your copy of Hootie and the Blowfish’s “Cracked Rear View” and all those Pogs (I know it’s hard), and remember everything that was STOMP.   Drummers banging on trash cans and using brooms and barrels to make music; it was exactly what you imagined yourself doing as a child pounding pots and pans with a wooden spoon.  Now that you have that in mind, take its cool factor and double it, then make it ten times more musically interesting.   Pretty awesome, right?  Well that still doesn’t do every movement of Magnus’s “Music for One City and Six Drummers“ justice.  Each movement builds in its bravery and propensity for satisfaction.  While the last movement seems to trade in complexity for actually musicality, it is hard to determine whether it is truly lackluster, or simply not as good as the previous three.

Besides the four major musical set pieces, the music throughout the entire film contributes to a heart quickening tone.  Often relying on just one drum set, the score is able to elevate chase scenes and make the sound of a metronome nearly menacing.  The filmmakers are able to keep the film from devolving into a series of concerts by creating an atmosphere of urgency for the performances.  The audience is acutely aware that the six drummers cannot simply sit back as if in an orchestra, but must infiltrate the performance space and communicate their musical idea before quickly evacuating the area.  It is the first time I could describe a scene as “Heat” with an orchestral performance.

I have been so caught up in a discussion of the film’s music that I have failed to mention that it is incredibly funny.  Absurdity permeates the film, and presenting it without a wink and a nod allows natural comedy to arise.  The main characters are often given little back-story but are developed fairly fully.   Nilsson’s Amadeus is tragic, but inhabits an element of wonder that highlights attributes of a concerned child.  In addition, the quirk which allows Amadeus to better discover the collective of musicians is introduced in a scene that is thoroughly entertaining, clearly inspired by silent comedies, and is successful because of Nilsson’s straight-faced performance.

Subtitles make a lot of people nervous.  Filled with worry that the words at the bottom of the screen will be distracting or that reading while watching a film seems like an undertaking, it is too easy to avoid foreign films.  “Sound of Noise” is a nice set of training wheels for the fearful.  The story is easy to follow and lacks a great deal of complication with characters that are sympathetic and relatable.  The film is shot in a style that is straightforward and isn’t distracting.  The music is the star of this film.  Nearly every performance is entertaining and tense, keeping you engaged throughout.  It seems odd to call a film a comedy focused on criminal acts of musicality, but that is the best way to describe “Sound of Noise”.  While its story may be slight, you would be hard pressed to walk away unsatisfied.