The Southern Gothic genre has a long and storied history.  For a period of time it seemed like filmmakers were abandoning the genre.  Thankfully, it has been experiencing a resurgence as of late.  Mostly independent features have been quietly slipping into theaters exploring a gritty South entrenched in violence.  “Mud” is an entry that proves the genre still has plenty of interesting stories to tell.

Ellis (Tye Sheridan) and Neckbone (Jacob Lofland) are teenagers in a small Arkansas town.  The two spend their days exploring the nearby woods and rivers.  Lighting upon a small island, they find a boat marooned in a tree, a result of the last flood.  While rooting through the boat, Ellis discovers food that is too fresh to be left by the previous owner.  As they prepare to leave, Ellis is distracted by a set of boot prints.  Appearing as if from nowhere, Mud (Matthew McConaughey) identifies himself as the boat’s mystery inhabitant.  Neckbone is suspicious, but Ellis believes that Mud deserves their help, unwittingly entangling the two in the mysteries that surround Mud’s life. 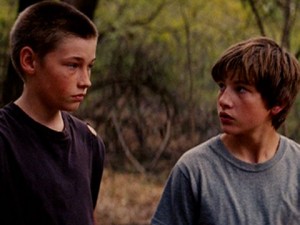 “Mud” marks director Jeff Nichols’s return to his home state of Arkansas.  Like his first film, “Shotgun Stories”, Nichols displays a deep understanding of his chosen setting.  The Arkansas of “Mud” has no frills, but manages to feel complex and real.  Small touches compound to add to the overall development and allows the surroundings to play just as important a role as any of the characters.

Nichols bites off a lot in his story choice.  The film is a coming of age story, romance and mystery but isn’t overcrowded.  Situations do not feel forced and arise organically.  There are long stretches throughout the film where not a lot happens, but do not misunderstand me, this is not to say that the film is boring.  Even with little action, the well-crafted characters are interesting enough that you will not want to look away.  The story builds continually yet subtly, creating a gentle rise in tension that sneaks up on you.  By the time the action reaches it zenith, Nichols has brought you so deep into his world that the screen melts into the theater. 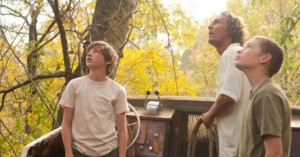 What has happened to Matthew McConaughey?  This guy used to be the go-to hunky romantic lead with a southern drawl.  Saying he acted was typically done ironically.  A better word is coasted, and lucky for him he was nice to look at.  Somewhere around “The Lincoln Lawyer” he decided to start showing up.  He has been churning out great performances left and right, and even made a turn in “Magic Mike” seem oddly inspired.  McConaughey becomes Mud.  The character is charismatic, mysterious and a complete romantic.  Even though he ingratiates himself to the children and ultimately the audience, a lingering fear of his violent past, which is only ever spoken of, lowly hums through the performance.  Unconsciously you fear and pity Mud.  He is self assuredly lost.  I can imagine no one else as Mud, and for the first time in recent memory I am looking forward to McConaughey’s next role.

Mud is the title character, but he is far from the lead.  The story is Ellis’s to tell and boy does he.  He is an only child caught in a crumbling household and at only fourteen has a stare that communicates an ageless wisdom.  The term child actor carries with it a stigma, and any film that posits itself squarely on a child’s shoulders is assuredly risky.  Sheridan answers the challenge without a flinch.  The theme of love is paramount to the film, and Sheridan’s Ellis has an immutable understanding that often drives the film forward.  You will be sympathetic to his struggle and admire his drive.  It’s a grown performance from an actor with years left to grow, something that is quite impressive. 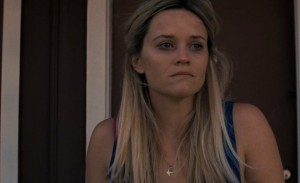 The rest of the cast is there to serve up any of the film’s remaining bits.  Reese Witherspoon is deliciously unlikable and Michael Shannon shows up to offer respite from the often heavy tone that he rarely is asked to deliver.  There are moments, especially those highlighting the mystery of Mud that feel slightly out of place.  These times are few and are little more than a mere distraction.  The worst offense the film commits is painting its villain with such broad strokes.  At times the antagonist is given conveniently abundant and unearned access, an inconvenient flaw.

The summer movie season is in full swing.  Superheroes fly onto the screen and blockbusters arrive en masse.  “Mud” will not break any box office records but fully deserves your attention.  Its writer/director serves a slice of the South with a full heart and rough exterior.  Through careful plot development and understandable characters, the film inhabits a space of worry and hope.   Matthew McConaughey is Mud, with a performance that will make you rethink everything you thought you knew regarding the depth of his skills.  With few distractions, “Mud” is a brilliantly crafted, excitingly delivered tale of love and the darkness it can draw out.

One thought on “Film Review: Mud”