Foreign Friday is your weekly adventure outside the United States to explore the cinematic offerings of the rest of the world. This past Sunday, America celebrated a holiday the best way that it knows how, by shoveling a great amount of food in its mouth hole and washing it down with a torrent of alcohol. As a belated celebration of Cinco de Mayo, I make the trek to Mexico by way of Netflix for “Sleep Dealer”.

It’s the near future and things have gotten dark.  Corporations are weaponized and oppressive.  The borders of the world have been shut down, and a digital network is the last thing connecting us.  Memo (Luis Fernando Peña) lives in a small village in Oaxaca, Mexico.  His father keeps a stern grip on the old way of doing things.  The family’s milpa, or farm, is struggling thanks to the corporation Del Rio Water that has dammed the local river, requiring the family to look down the barrel of a mini-gun as they pay for increasingly expensive water.  Memo has little love for farming and instead has a passion for electronics and hacking.  He constructs an electronic receiver that allows him to listen in on transmitted communications.  The more he works on the receiver, the farther its range gets until one day he taps into the wrong signal, forever altering his family’s entire existence. 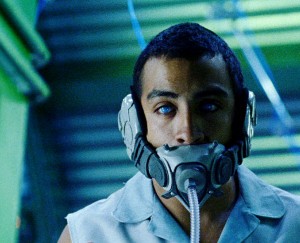 There’s a lot going on here.  We have an old Mexican farmer that’s set in his ways and does not accept his son’s different outlook on life.  It takes place in the future, but wait, it’s not too far in the future, just enough that everything is super shitty if you don’t have money.  The father character is a cliché whose sole purpose is to belittle the son and create some kind of emotional resonance.  He’s pretty useless and his general mediocrity is annoying, borderline aggravating.  The future setting is the part that is most intriguing.  The idea that corporations have taken over is far from new, but the film does a good job of milking it.  The television commercials and programming, like something out of “Robocop” (“I’d buy that for a dollar!”), do heavy lifting in an exploration of where reality television might be headed.  The television is identified as specifically American, but hey, who’s to say we aren’t the downfall of western civilization.  The future stuff works on paper, but good God, the effects are bad.  You know what; I need a new paragraph to really stretch my legs on this one.

Ah, that’s better.  I get that this is an independent feature, and that complex visual effects can carry a heavy price tag.  But the poor quality of the effects is inexcusable.  When you see the first drone fly across the screen you may have to stifle laughter.  The quality is on par with a Syfy (I hate that they spell their name that way) television movie.  It is distractingly terrible.  Accomplishing good visual effects on a modest budget is possible with an abundance of recent examples.  “District 9” crafted entire characters, “Moon” developed a full setting and “Monsters”, a film that was produced for less than “Sleep Dealer”, subtly used visual effects to not only create said monsters, but the entirety of the signage throughout the film.  This film’s subject matter has aspirations to be listed with those films, but visuals that share better company with “Sharktopus”.

As the film continues, it is more evident that this film’s concept might be the best thing it has going for it.  There are a lot of good ideas.  The problem is that there are A LOT of ideas.  Getting a job requires a person to get “nodes”, ports that are installed on a person allowing them to gain access to a digital world.  Yes, you will constantly be thinking about “The Matrix” whenever you see or hear about them.  The majority of the poor get jobs at factories or “sleep dealers”, a term that is poorly defined and from what I can tell has something to do with being worked until you pass out or die.  These sleep dealers allow for Americans to get cheap labor from Mexicans without them having to come into our country.  Um…ouch?  Memo also meets Luz (Leonor Varela), an aspiring “writer”, clearly introduced to be the love interest.  Luz is trying to make a living selling her memories online, a concept that is never fully explained.  Do you lose your memories for good?  How do you get images from a story someone else tells you?  Is this a dig on blogging?  Keep in mind; this is in addition to the theme of corporate power, oppression of the common man and an underdeveloped story of redemption.  Overall, it has too much going on without enough development. 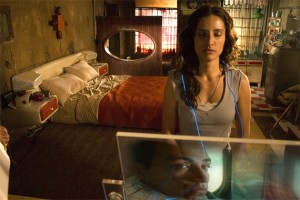 Much of the acting is nothing special.  Peña is wooden as Memo, as is Varela as Luz.  The two have some chemistry, but for the most part the relationship isn’t believable.  A storyline involving a drone pilot piles onto the already staggering amount of topics.  Its involvement in the film’s ending is far too convenient resulting in a resolution that feels unearned.  Alternatively, the moments of the film that do not require visual effects are shot well.  Director Alex Rivera is able to capture the worry and hopelessness of Memo as he wanders.  These bright spots show a director who has talent when he limits his focus.

When you’re a kid having just one thing is never enough.  I want all the toys and I want them now.  Unfortunately, “Sleep Dealer” director Alex Rivera still thinks this way.  With his first feature film, he brings every interesting idea to the table.  The resulting party is crowded and not very much fun.  The film looks to tell a science fiction tale in a world only slightly different from the one we live in now.  The concept shows promise but by trying to do too much it is as lost as its main character.  Bland acting and lackluster visual effects only bring more attention to the weak links in the story.  Rare moments occasionally emerge from the rubble to display the skills possessed by the director, but Rivera should’ve been forced to look at all his toys and just pick one.