Foreign Friday is back to give you the opportunity to sound more interesting. Not all films are flowers and rainbows, sometimes it can get dark and international cinema has no problem embracing the ugly. This week we head over to Austria for the thoroughly disturbing “Michael”.

Michael (Michael Fuith) is by all accounts a normal guy.  He does moderately well at his job and has a cordial relationship with his peers.  On the surface, there is nothing truly notable about his life.  That is until you open the door to his soundproof basement.  See, Michael has a secret, and that secret is a ten-year-old boy named Wolfgang (David Rauchenberger).

Okay guys; let’s get real for a second.  This film is not for the faint of heart.  Michael is a pedophile.  This is what the film is about.  If that’s a deal breaker for you, then by all means feel free to check out.  However, let us not forget that this is a film.  Occasionally, a film chooses to focus on a topic that is distasteful.  As a viewer, you have a choice.  Sometimes a challenge is necessary.

The term “horror” conjures images of masked killers wielding blades and worlds of the macabre supernatural.  These films often take our innate fears and anthropomorphize them, allowing us to remain detached while facing them down.  It is much more difficult to face our fears head on.  In description, “Michael” is not a horror film.  No blood splashes on the screen and the familiar piercing scream of terror is never heard.  The film moves at an often slow pace and does not boast great bursts of action.  Nevertheless, “Michael” is a horror film.  It is the simplicity and absence of the typical that makes the film so frightening. 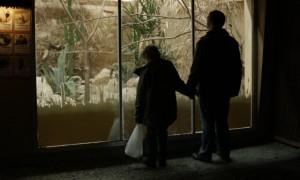 Writer-director Markus Schleinzer is a daring man.  He chose to not only tell the story of a pedophile, more or less from the man’s point of view, but to do so in such a frank matter.  It would be very simple to make Michael’s every action despicable, to lace villainy throughout his entire being.  Schleinzer resists this and smartly communicates that Michael is a man.  His perversion is an active part of his life, but not the sum total of his existence.  The man has a family.  In his family’s eyes he is a brother and a son.  They are not aware of his darkness and love him for the man they know.  As a man, he is not extraordinary.  You come to understand that to all those in his life, Michael is mundane.  He is quiet, uninteresting and unspectacular.  Most importantly, he is such a collection of uns that he is able to walk through life without drawing concern.  Our knowledge of his sick ways makes his interactions with others difficult to watch.  You want to reach through the screen and enlighten everyone to this terrible being, if not only for the boy he terrorizes then from a desire for retribution.

Michael Fuith’s performance sells the role of Michael.  The character is inhabited so fully that I imagine the actor must have experienced a degree of mental stress.  He is able to breathe life into this monster and develop him as fully human.  Besides his existence as a pedophile, there are moments that give glimpses of the torment within Michael’s head.  Each of these moments casually strolls across the screen, and it is Fuith’s delivery that can allow them to go unnoticed, much like the character in his world. 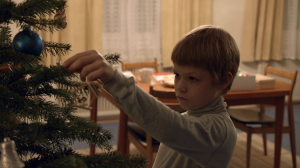 The film takes place over five months, but there is no way of knowing for how long Michael has had Wolfgang.  At one point a box of letters written by Wolfgang to his parents is shown, and it is full.  Interactions between the two appear to be routine.  Wolfgang is downtrodden and goes through the necessary motions, implying that he has been in captivity for a great while.  David Rauchenberger has little dialogue as Wolfgang, yet manages to perfectly convey the necessary emotions.  The character’s detachment is not overdone.  Rauchenberger captures the appropriate mix of adult frustration and childish release.  His performance is unfalteringly genuine.

Films offer us an escape.  Often we are taken to a world of wonderment, a life of adrenaline pumping excitement and places of passionate romance.  Some films refuse to allow this transport.  There is no egress in “Michael”.  This world is our lackluster world.  In its straightforward presentation, the existence of Michael makes your skin crawl.  The film does not revel in bombastic set pieces, allowing the horror to occur organically.  Schleinzer has a light directorial touch that tears you up from the inside out.  This is not a film to garnish repeat viewings.  “Michael” is uncomfortable and upsetting and it needs to be.  Jason Voorhes and Michael Myers draw upon a fear of the unknown with faces that constantly lurk behind masks.  This man wears no mask, but through Fuith’s honest performance and Schleinzer’s subtle direction, “Michael” shows us that the real monsters will not be so kind as to telegraph their existence.