Foreign Friday is here to take you on the trip that your bank account won’t allow.  This week we decided to step on the gas and dish out some action with your subtitles.  Grab a baguette and get ready for a fight because we are headed to France with “Sleepless Night”.

Two men are looking to make some money.  The men, adorned in ski masks, have decided to steal some drugs.  Unfortunately for them, not everything goes to plan.  In the scuffle that sees the two make off with a big bag of cocaine, Vincent (Tomer Sisley) loses his mask, is seen and gets stabbed.  Word gets back to the bag’s rightful owner, drug kingpin and nightclub owner José Marciano (Serge Riaboukine).  José kidnaps Vincent’s son and refuses to free him until his bag is returned.  So begins a very long night for Vincent.

This film has entirely too much going on and I really don’t know why.  The plot is fairly boilerplate; man does something bad, man gets discovered, bad guy takes something man loves, man must go through trials to get something he loves back.  That’s it.  An idea that’s become familiar to audiences thanks to “Taken” and “24”.  But “Sleepless Night” refuses to be this easy.   Imagine driving down a road, it is a straight road and your destination is within your sights.  But wait, the road is blocked off and a detour sign leads you down a labyrinth of side roads.  As you arrive at your destination, beleaguered and annoyed, you look back to where you started only to witness that the construction that forced this adventure of detours isn’t even occurring.  That’s what it is to watch this film.  The premise is basic and the plot points are predictable but regardless of your knowledge of the occurrences, you are forced to endure a series of offshoots that add nothing of substance to the overall picture.  A plethora of characters are introduced only to be sidelined with nothing to do, making their existence all the more befuddling.  Unfortunately for the film, complexity does not equate to quality.

Frédéric Jardin’s direction is as perplexing as the film is complicated.  Shortly after the film begins we are treated to the first of many handheld shots.  The screen jolts and jostles as the viewer tries to focus.  Just when I worried that this was how the entire film was going to be presented, and quietly cursed “The Blair Witch 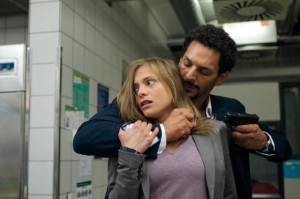 Project” for making this a thing, the camera leveled.  I breathed a sigh of a relief just in time to be slapped again with the shakes; and so the film would continue, varying between restless movement and steady shots, ad nauseum.  The choice of using handheld cameras has its place, and when done appropriately can bolster the uneasiness and quickness that a film requires.  It worked in “United 93” and the aforementioned “Blair Witch”, but it doesn’t here.  Its inclusion isn’t justified for the majority of its use.  As the film nears its end, there is a shot in which the handheld is used in a manner that proves its potential; however, this shot stands alone in a vast field of scatterbrained camerawork.

But here’s the thing, “Sleepless Night” is actually a pretty good action film.  When Jardin isn’t straining to film exposition or the next twist and instead focuses on an action piece, the man is gifted.  The fights have an authenticity that will make you ache with each punch.  Each set piece is completely comprehensible and exciting; a feat that is even more impressive given the irrational presentation that surrounds it.  Tomer Sisley is left to do a great deal of the heavy lifting for each scene and expends a fair amount of perspiration doing just that.  Despite the predictability of the action’s outcome, it is gripping and fully engrossing.  Much of the fights feature Sisley himself, rather than a stunt double, a choice that makes these moments all the more engaging.  As the night goes on, the exhaustion of the nightclub’s inhabitants is readily apparent and Vincent’s devotion to rescue his son becomes borderline heartbreaking.  Were it not for Sisley’s performance and the focus that Jardin puts into the action, this would not be possible.  When things are kept simple, this is a superb action film.

It can be difficult to watch great potential be squandered.  To know that there is so much promise hidden behind a façade of grandiose intricacies is wearisome.  “Sleepless Night” tries to do much more than it can manage.  The film utilizes a dizzying supply of unfocused camerawork.  The shots offer variation whose sum is less than its parts.  The story is full of expected surprises and underdeveloped side roads.  When the film stops to bring the action, it finally delivers.  Every fight is well choreographed and filmed clearly.  The action is absolutely fun to watch.  The actors’ performances are genuine and contribute a gravitas to the carnage.  There is a simple, exciting, action film buried underneath a dog-pile of complexities just fighting for your attention.  The short glimpses of greatness seen in “Sleepless Night” make watching the film a frustrating experience.