In high school, relationships were easy.  Sure there was a level of drama involved that often put the most common of soap operas to shame, but there were few real issues.  As you grow older, every relationship brings with it further complications and the stakes continually grow greater.  But I’m just talking about the trials of two people, occasionally when a man loves a woman…um…when a daddy and a mommy…what I’m getting at is sometimes a third smaller person joins that world.  “What Maisie Knew” offers a new way to look at a failing relationship, through the eyes of a child with the most to lose.

Susanna (Julianne Moore) and Beale (Steve Coogan) constantly fight.  Any semblance of a loving relationship has been replaced with vile words and hatred.  Maisie (Onata Aprile), their young daughter, is the only thing that continues to tie the two together.  Paraded through courtrooms and abandoned at school, Maisie stops being a child to be raised and becomes a prize to be won. 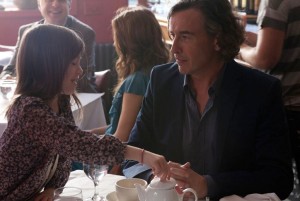 This film will inevitably be compared to “Kramer vs. Kramer”, another film that looks at the custody battle that ensues following the end of a relationship.  However, the similarities stop there.  “Kramer vs. Kramer” is about a failing marriage and a parents drive to provide everything for his child.  The film is squarely focused on the adult perspective.  “What Maisie Knew” is another film entirely.  Instead of looking at how the adults are affected, we are seeing the struggle through the child’s eyes.  “Kramer vs. Kramer” is a fantastic film in its own right, but the unique viewpoint of “What Maisie Knew” sets it apart and marks it as a film just as deserving of your time.

By situating Maisie at the center of the film, the major risk is that the child actor will not be able to support the weight of the message.  Onata Aprile alleviates this fear in her portrayal of Maisie.  Aprile delivers a performance that is quietly delightful.  Maisie’s parents are extremely selfish but somehow she has managed to remain grounded.  An adult perspective would argue that any child put in Maisie’s situation would without a doubt have emotional scars.  However, this is a decidedly adult assessment.  You forget about the simplicity that comes with being a child.  A child doesn’t carry around baggage; they are too busy worrying about actually living their lives.  The innocence of Maisie is on full display and her maturity emerges from necessity rather than time.  You connect with Maisie and hurt for her struggle.  The role could have easily come off as wooden, but Aprile injects the proper amount of joy and hardship into every moment.  Her performance is understated, mature and heartbreaking; it would be impressive from a grown adult.  The sheer talent possessed by Aprile must be witnessed. 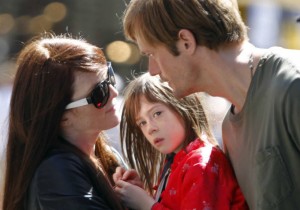 While Aprile is the heart of the film, the direction fully develops the youthful point of view.  The camera lights on Maisie’s eyes continually, moving us to her level.  We go where Maisie goes.  Low camera angles further heighten the breadth of the world surrounding a young child and make even Steve Coogan appear imposing.  Directors Scott McGehee and David Siegel do not draw attention to their choices, further enveloping you in Maisie’s experience.  Shots that peak through railings and around corners, just as a child would, make the situations authentically uncomfortable and bleak.  It was a strong choice to not focus closely on the relationship between Susanna and Beale, your worry for Maisie will overpower any curiosity over how the two came together or the love they may have had.

Maisie is a well-crafted character that, despite her unspoken maturity, feels plucked from life.  Unfortunately, the same cannot be said for the adults in her life.  The villainy of the parents isn’t only announced but shouted from the rooftops.  There are few, if any, redeeming qualities of both Susanna and Beale.  Their selfishness knows no bounds and they have absent-mindedness as parents that can border on the absurd.  On the other side of the spectrum, the actual caregivers to Maisie are shown to be caring and loving parental figures.  In both cases, it is too much.  The parents are too deeply vilified, having no true moments of good, and the caregivers are so filled with love to the point of artificiality.  Some work is done to establish the caregivers as flawed humans, but these moments are fleeting.  The problem exists in the way that they are written and not in the performances.  Moore consistently delivers and Coogan, while primarily known as a comedian, produces a delightful mixture of charm and sliminess.  Alexander Skarsgård’s Lincoln will melt the hearts of the entire audience, regardless of gender.  Joanna Vanderham is somewhat overshadowed by most that she shares the screen with, however her moments with Aprile are sweet.  The broadly drawn adult characters are merely a minor flaw on an otherwise beautiful canvas.

As we grow older it is easy to lose touch with childhood.  Our actions have unseen consequences on all those around us, especially the littlest ones.  “What Maisie Knew” is a film for adults about childhood.  Through clever camerawork and unimposing direction, the film urges you to see the world from a unique perspective.  Onata Aprile shines in a performance that captures the tribulations of youth in strife.  The one dark spot in the film is the broad strokes used in painting the supporting adult characters.  Despite serviceable performances from all those involved, the believability of the characters is often called into question.  “What Maisie Knew” tackles a familiar issue in a novel way.  It has its issues but ultimately delivers a story of heartache and struggle worth your full attention.